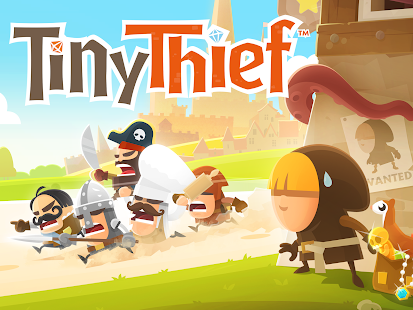 In Casual Commitments, we explore the ups and downs of casual gaming.

The second time waster on my list is called Tiny Thief, a game that has had a bit of controversy surrounding it thanks to the publisher, Rovio. You all probably know Rovio for its hyper-popular Angry Birds franchise, which has spawned more merchandise than Star Wars over the last few years, and when a company is making that kind of money one of the first things to slide is its morals. The issue is with the insane markup for Tiny Thief on the Steam platform compared to the App Store. The normal retail price on Steam is about 4,000% more expensive than the App Store version which has caused consumers to be, picket the Rovio offices, mad. I bought the game for two dollars, so I don’t have that same grief with the company.

In my opinion, Tiny Thief is to the adventure genre what Final Fantasy VII is to RPGs. This game is probably the best introduction to the genre that you can possibly have and it makes you want to try your hand at more difficult adventures once you have completed its journey.

The whole atmosphere of the game is a bright fairy tale where you play the role of a Robin Hood like thief who must steal a particular item on each level to advance. This would be a bit simple even for a casual game, so there are also bonus items to steal and your pet ferret to find. Completing all of these nets you a star, with a perfect completion getting you three stars for the stage.

Most adventure games give you very few hints to progress the story, which can make them infuriatingly hard if you can’t wrap your mind around the puzzles. Oft times the developers make completely random connections like string-plus-alcohol-plus-birthday-candles makes a flamethrower. This flamethrower will be used with duct tape and a KFC bucket to make a hot air balloon. There is nothing clever about this and I personally hate that feeling of “ARE YOU F’ING SERIOUS!” that comes along with “solving” these riddles.

That really sums up what you have to do. There is a story in the game but it is just the avenue through which the game is delivered. Tiny Thief falls for Tiny Princess and must steal his way to her. Sweet like aspartame.

New for Steam are Tiny Thief achievements. Most of these are just completion based where you finish a level or you don’t use the hint option for multiple rounds and at the end of the chapter (there are six, one being a tutorial) and you get the achievement. To add some more flair to the game there are hidden achievements which I won’t spoil here, but they tend to deal with humans being weirdoes and accosting the poor pixel people. It is an easy game to perfect if that’s your thing.

I will give Tiny Thief a 5 out of 5 Diamonds on PC (buy it on sale if possible). It is the perfect game to play for five to ten minutes and I look forward to some DLC levels if they ever happen.