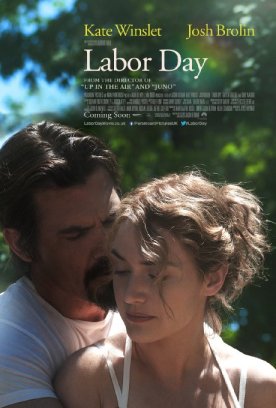 In “This Looks Terrible” we look at previews for upcoming movies. We… probably look too closely.

Damn you, Jason Reitman. Up in the Air was so damn good and now you have to leave this heap of trash on my doorstep? This shitpile is called Labor Day and it’s somehow a romantic comedy about a mother and son that are forced to take in an escaped prisoner.

This trailer teaches us a few helpful things if you ever find yourself quasi-kidnapped by an escaped convict. First, after he ties you up if he feeds you like a baby then you know he won’t hurt you. He’ll become a fatherly figure through teaching your son baseball because that’s not been done in movies ever before.  And if you’ve suffered the loss of a loved one it can be cured by baking a peach pie.

Ugh, fucking spare me. Let’s not forget that nobody gave him shit. He forced Kate Winslet to take him home because he threatened the life of her son. Did an 18-year-old write this script? Is this movie just The Notebook but for the 35+ crowd? This is the kind of shit that should only be allowed on Lifetime or The Hallmark Channel.

“I’d take 20 more years just to have another three days with you.”

Can we talk about this for a second? From everything I’ve heard prison isn’t a fucking vacation. And because he’s doing time for murder, he’s not going to be in minimum security either. Anyone dumb enough to do 20 years of hard time in exchange for 72 hours with someone they’ve known for a week deserves to be in stupid prison.

But it’s okay everyone, you don’t actually have to see this movie. They show us the fucking ending in the trailer! You’ve got Henry covering his ears while laying down in the back seat of a car as bullets pierce the seats. So James Van Der Beek is going to get into a shootout with Brolin, kill him, and then we’re going to have a dramatic death scene with Brolin whispering his last words as Kate Winslet holds him. My guess for that scene is Winslet pleading for Brolin to not leave her and him saying: