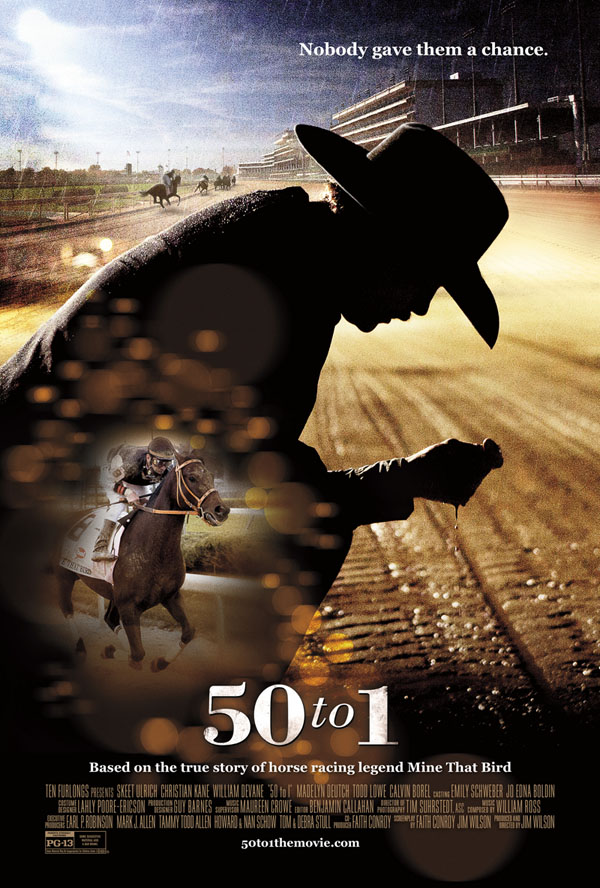 In “This Looks Terrible” we look at previews for upcoming movies. We… probably look too closely.

My brain hurts from trying to understand the rationale behind making a movie about an event that people only care about for three days a year and forget about two days after the event. The movie is called 50 to 1 and it’s about Mine That Bird’s improbable Kentucky Derby win in 2009. Oh, you don’t remember Mine That Bird? Well maybe the star-studded cast of Skeet Ulrich, Christian Kane, and William Devane will draw you to the theaters. Oh, you don’t know who they are either? I’m hoping their marketing strategy involves a TV trailer that includes rave twitter reviews, otherwise maybe 100 people will see it.

This trailer NEEDS you to know that they have cowboys in it. Ulrich and Kane are just two REG’LA COWBOYS with one last shot at making it. It actually contains a scene where there’s a fight at a saloon and a guy goes through the front window like in every shitty western you saw on AMC as a kid. They might as well have used the Benny Hill theme for the first half of it.

And it doesn’t matter that they had Calvin Borel, one of the hottest jockeys at the time, riding the horse. Mine That Bird was a longshot! Except that after the Kentucky Derby he got second and third in the Preakness Stakes and Belmont Stakes, respectively.

But let’s not be too picky. Just know that this film is in the trusted hands of a company called Ten Furlongs. While I thought making a movie about a sport no ones gives a shit about was a bad idea, some idiots decided to make a production company dedicated to it. They spared no expense in getting their visual effects from a company named “Great FX”,,which sounds like the film equivalent of getting dinner from “Solid Restaurant.” With a production budget of $10 million there’s a chance this film will make its money back, but it won’t be with any of mine.