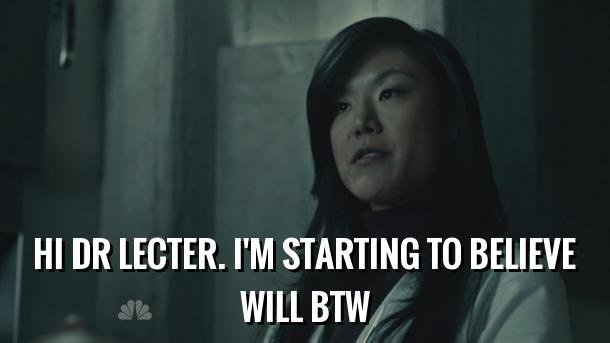 We start with the second in a series of split montages, this one featuring breakfast. As Hannibal lovingly prepares his meal in the comfort of his own home, Will stares down the tray lumped with what barely passes for breakfast. The first time we see this split montage is when Hannibal and Will are dressing for trial; this time is different in that it highlights the relative high and low of their respective situations. The high and low is important in this episode, as its juxtaposition implies a classical dramatic structure, that of the protagonist falling from a high place to a low place. It’s unfortunate that the dramatic casualty of this thematic exactness is Dr. Beverly Katz. From the high point of living and finally discovering Hannibal for what he is, Dr. Katz is brought down to lowness, being killed and sliced in a “performance piece” better than any by Damien Hirst (The Cell with Jennifer Lopez also comes to mind). And what exquisite sadness I felt upon seeing Dr. Katz laid out as if prepared for examination under a microscope. RIP, Dr. Katz.

Eddie Izzard is brought back in as the serial killer Abel Gideon in order to act as a sounding board for Hannibal, Will, and the others. But I could just as easily have done without him in this episode. His character brought nothing but lowness, spitting out pithy dialogue like the old man from Pet Cemetery. (An example, speaking of Hannibal: “He is the devil, Mr. Graham. He is smoke. You’ll never catch the ripper. He won’t be caught. If you want him, you will have to kill him.”) The obviousness of this is mortifying; I never, in a million years, imagined that this story would end neatly with Hannibal being meted out justice through the courts. Blood will always be repaid with blood in proper tragedies.

But speaking of courtly justice, what of Will’s trial? And where the hell is Cynthia Nixon to add some perspective to this mess? Instead of Cynthia, we’re given the orderly of the psychiatric ward, a gorgeous pale fellow who readily accedes to Will’s demand that he kill Hannibal. Will, of course, fears becoming Hannibal (hence the horror he feels as the antlers grow through his back), but he’s still willing to “transcend” justice in order to be justified. Will has shifted here from justice to revenge, a tragic flaw; it’s unfortunate that he had to resort to such extremes in an attempt to attain rightness.

The scene between Hannibal and the orderly is properly “high” in its beauty; the camerawork here captures the chiaroscuro of Hannibal’s bleeding body as he hangs Christ-like with his feet on a bucket. It’s almost like a Caravaggio. And that beautiful line which gives us all of Hannibal—“Only if you eat me.” Such a high moment, capable, on the brink of annihilation. And then we’re brought crashing down as the orderly is shot, dashing Will’s plan and possible hopes for ever leaving the psychiatric ward.

Hannibal airs Friday nights on NBC. You can read our piece about the previous episode here.