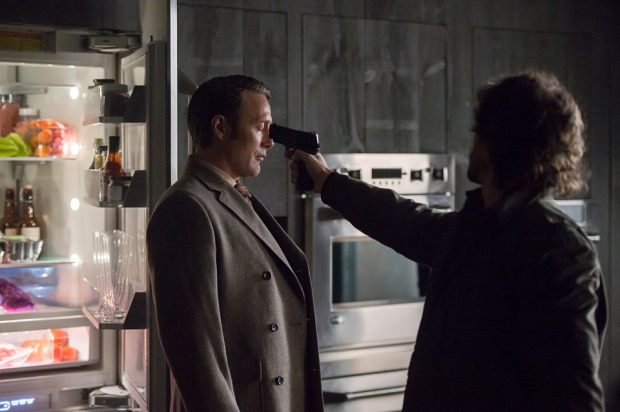 Every 15 minutes or so, I let out an audible groan while watching this latest episode. Miriam Lass returns after being found by Jack, only to kill Dr. Chilton out of an impulse she can’t control. Oh Miriam, made into just a simple plot device. Oh Dr. Chilton, made into just a simple plot device. So now we have a freed Will, a Hannibal no longer under suspicion, and a bewildered audience.

We still haven’t caught up to the frame with which the season opened, so we know the showdown between Hannibal and Jack is imminent. What will bring them together in this way? What will finally open Jack’s eyes? He jumped on the Dr. Chilton Is Guilty Train pretty hard, but when he finally catches the poor bastard in the snow, we see immediately that Jack knows Chilton is innocent. Miriam’s impulsive killing of Chilton is obviously the result of psychological transference on Lecter’s part; by using recordings of Chilton’s voice and light-disruption therapy, he was able to train Miriam into believing that Chilton, not Hannibal, was the Chesapeake Ripper and her captor. Hopefully Will can bring Jack around to this, forcing his move against Hannibal.

Some may misinterpret the depiction of the Wound Man in this episode as an obvious symbol of superiority, drawn from medieval medical books and rendered lovingly by Hannibal on graphite in his office. However, the Wound Man operates more as a bastardization here of the Hanged Man, a pittura infamante that quite literally symbolizes resurrection. Hannibal sees this opportunity through Chilton as a way to resurrect as a new creature and move on; though I doubt he’ll give up the grisly trade, he sees this as an opportunity to escape. Will’s appearance at the end, though, signals that we are not finished with this reddish business by a long shot. Will would like to resume his therapy, and we shall see where it takes him.

Hannibal airs Friday nights on NBC. You can read our pieces about previous episodes here.