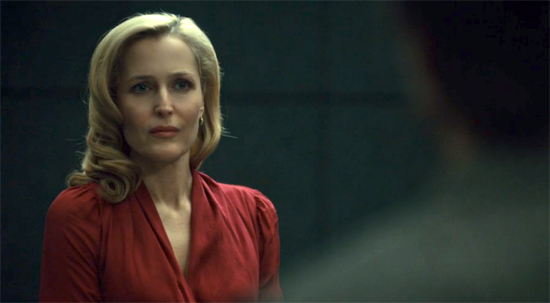 This episode was the kick in the pants that this season needed heading into the finale. What made this episode so big and bold? Gillian Anderson. She rocked her role as Dr. Bedelia Du Maurier, revealing everything in the suggestions and silences. Her ghostly, incantatory tone as she spoke there in the interrogation room gave me chills. And finally clarity was added, showing us what Jack and Will have been up to this whole time. Bedelia was fated to return as soon as she uttered her belief of Will’s innocence to him in the asylum. By bringing in someone who hasn’t been sullied by the lacklusterness of the past six or seven episodes, we, and the show’s characters, are able to take a step back and reevaluate the madness into which we’ve been drawn. Jack and Will are trying to bait Hannibal? Seriously? Though it’s easily their worst conceived plan, it does give great excuse for Will’s obsequious fanboy attitude toward Hannibal these past few weeks. What had bordered on the homoerotic now can be easily enough explained as an attempt at intimacy. And intimate we get.

Bedelia states that Hannibal can be made prey to his own aesthetic whimsy, a clever choice of words on her part, given how Hannibal views his victims. Ultimately this could be a critique of the aesthete, that echelon of society outside of financial worry, wherein one has time and means to enact one’s fantasies. How this will become a trap for Hannibal isn’t immediately apparent, but I predict they will have to dispense with this advice if they actually want to catch the bastard.

The scene where Hannibal convinces Mason Verger, by way of amyl nitrate, to scrape off his own face is wholly incredible; I was literally disgusted by the wet noises and the voice thinning out. Without the veiling of chiaroscurist darkness, this certainly wouldn’t have been able to air on network television. But this scene showed off what the production of this show can really do. And the episode as a whole was well shot; we had lots of close-ups of faces and people seen through the negative spaces left by others. These kinds of choices really make us examine everyone in a new light, which is perfect as we head into the final episode for this season.

So, what’s going down tonight? We know, via the first episode, that Jack and Hannibal will have their showdown. The catalyst for this could be anything, but I think it will have to do with Alana, who’s been strangely absent. Hopefully we’re over this whole Mason and Margot business. Now that NBC has bought a third season, we know this charade must continue. But if we’re left tonight with some horrible impossibility or vagueness, I might not be tuning in next time around.

Hannibal airs Friday nights on NBC. You can read our pieces about previous episodes here.