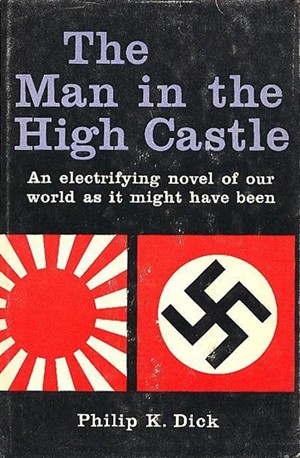 Alternate histories are a strong subgenre within SF. They have been around forever. If you really want to stretch it, technically Livy wrote a hypothetical consideration of what would have happened if Alexander the Great had moved West towards Rome instead of conquering the East. He says Rome would have won, but I mean, his name was Titus Livius Patavinus, so. In 1490, the chivalric novel Tirant lo Blanch postulated a history in which the Turks never took Constantinople. 1953’s Bring the Jubilee told a story in which the Confederacy won the Civil War. There is an absurd amount of alt-history books out there, but few are as famous as The Man in the High Castle.

This type of fiction starts out by finding a historical pressure point one, two, ten decades ago, flipping what happened, then exploring the ramifications of the strange new world thus created. Here, the pressure point is Giussepe Zangara’s attempt to assassinate President-elect FDR. In The Man in the High Castle, he is successful. His VP takes over, does a bad job, and is replaced by a Republican president who fails to surmount the Great Depression and maintains the USA’s isolationist policies. The end result of all this is that Russia is conquered in ’41, England cannot stand alone against Germany and falls, and then the complete destruction of the Pacific fleet at Pearl Harbor makes America easy pickings. At the start of the novel, Germany controls the east of the United States, Japan controls the west, and the mountain and southwestern states form an autonomous American buffer zone between the two.

Touching a pressure point in history, like touching a pressure point in the body, sets off reactions far from the initial point of contact. The Nazis, their ideology unchecked by defeat, continue in their insane belief in a master race. This obscene self-confidence coupled with German technological prowess leads to the colonization of other planets. It also leads to Nazis hunting Jewish people all over the world and shipping them back to Berlin, and Nazi scientists spearheading a vaguely-referenced experiment in Africa that leads to the extermination of most of its populace. Again – the center of SF is extrapolation, and PKD extrapolates the Nazi dynamic of world-changing scientific progress built on human misery and their inhumanity to their fellow man. Same pattern, wider oscillation. As a brief aside on German technological prowess, NASA probably would not be what it is today without Wernher von Braun, who created the rocket booster system that put Neil and Buzz on the moon. He did the same kind of rocketry work for the Nazis, only it was weaponized as the V-2 rocket. Von Braun has always maintained he just wanted to work on rockets and had to join the Nazis to do so, and is reported as saying, upon hearing the news of the first successful V-2 bombing of London, “The rocket worked perfectly except for landing on the wrong planet.” This self-serving attitude and the avoidance of responsibility by wrapping himself in idealism (these rockets were built with slave labor) is beautifully satirized by Mort Sahl, the first modern stand-up comedian. The following joke is pretty much the whole reason for this aside, as it is one of the best I’ve ever heard: “I aim at the stars, but sometimes I hit London.”

Out west, the Japanese are comparatively benevolent colonizers. Throughout the Pacific states, the Japanese run things, but tend to be more lenient than their Nazi counterparts. Western Americans absorb much of the culture of their colonizers, including using the I Ching and adapting to Japanese systems of social advancement and behavior.

The first major plot concerns an intrigue between German and Japanese representatives to one-up each other. The Germans want to be the sole superpower in the world, and are covertly maneuvering against Japan. The Japanese are covertly maneuvering against Germany to defend themselves. The second major plot thread is that an author who lives in a fortress in the Rocky Mountain States (the High Castle) has written a book titled The Grasshopper Lies Heavy which is a piece of alternate history fiction that explores what might have happened if America had entered the war and the Nazis had been crushed. This book is very popular underground, and a couple of the characters decide to take a road trip to meet the man behind it.

Speaking of characters, most of these are cardboard-flat. In many of his books, PKD puts just enough in his characters to make them move around realistically, then lets them go. I still can’t decide if this means PKD is a master of simplicity, or if characterization is just not his strong suit.

There is a reason this is arguably PKD’s most acclaimed book. Sure, the characters might be stick figures, but the world they move around in is unsettlingly plausible and well-built. Americans grow up with “we are the greatest/we’re number one” hammered into their heads. Our President is regularly referred to (by us, anyway) as the leader of the free world. Even if you take Eddie Izzard’s joke about there being a lot of countries, none of whose mottos are “We’re #2!”, to heart, the USA still has an unparalleled level of power and influence in the modern world. Therefore, reading a book in which America is weak, colonized, subjugated by and dependent upon foreign powers creates a deeply personal sense of horror in the American psyche. The adeptness with which PKD constructs and directs this sense of horror makes this book well worth your time.