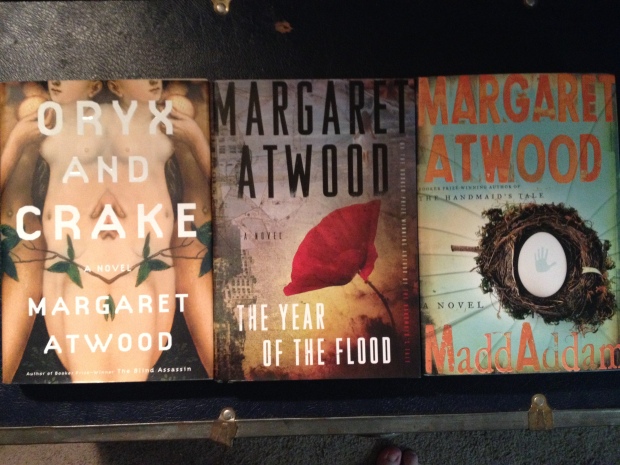 I read Oryx and Crake when it came out in 2003, certainly never anticipating two follow-up novels. I was given the next two books as gifts over the years as they came out, but would set them gently next to the first, like glass miniatures on a shelf. Facebook was blowing up recently with news of Darren Aronofsky adapting the three books into an HBO miniseries, so I decided it was time. I read all three books over the course of a week and a half, finishing just fifteen minutes prior to the composition of this piece. As always, I aim for brevity when I write for this site, so pardon my simplifications.

Oryx and Crake is Atwood’s only novel featuring a male, first-person protagonist (named Snowman); the other two novels vacillate between voices, with the third in the series having the most variety of narrators. I mention this only because it seems obvious that we need Snowman to contrast with one of the more prominent narrators in the latter two, Toby, a female Gardener. The whole world of the novels is a future wherein biological manufacturing is the norm and companies serve as the main units of life, housing families in compounds. Eco-groups like God’s Gardeners rise in reaction to the companies and their lapse of morality, maintaining “older” ways of life (keeping bees, gardening, etc.) Since all this doesn’t seem far off at all, the novels maintain a sharp sense of realism, even in the more absurd parts. Being grounded in a future that seems not only plausible but also eventual tethers the novel firmly to the ground, imbuing it with a prescience that I love about Atwood. Her characters and plots always surprise me in how true to life they are. So when you have pigs that think like people and invented bacteria that dissolve people into goo, it’s nice to be able to believe in them.

It’s obvious that Atwood favors Toby as a narrator; she is so true to Atwood’s other narrators, women who see the world as a series of mutable paintings. The only time I cried during the course of the trilogy was when Toby had to tell the bees of the death of a fellow Gardener who had taken care of the hive. The addition of things like talking with the bees and the word smile coming from the Greek for scalpel are classic Atwood (thank you to my Dad for help with the Greek there [see picture below]); I learn more from her books than almost any other author (except Cormac McCarthy, whom I read with a dictionary on hand). Just so you know, lambent means glowing or radiant.

All together, the novels function quite beautifully, weaving in and out of the chronology, fashioning from the whole a triptych of corporate dominance, human desire, and the ability to play God. Atwood’s world, before and after the Apocalypse, is so eerily close to our own that I felt an immediate desire to plant a garden and learn how to take care of an apiary, lest the grid fail tomorrow. It’s weird, but the novels most closely resemble morality tales than anything else. In other words, I feel only improved after finishing them.

Jonathan May watches too much television, but he’s just playing catch-up from a childhood spent in Zimbabwe. You can read his poetry at owenmay.com, follow him on Twitter at @jonowenmay, or email him at owen.may@gmail.com