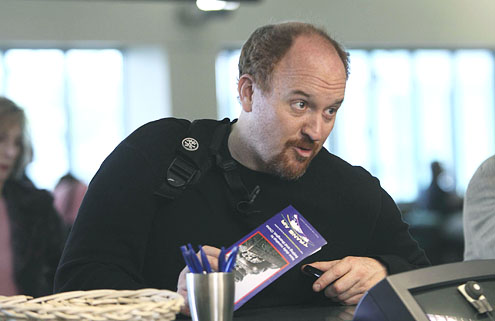 Louis C.K.’s critically acclaimed show Louie’s fourth season runs as two episodes every Monday night. Rather than just answering the question of “are these episodes good,” (because the answer is always yes) we’ll talk about the big lessons imparted in each episode. This week: the season ends.

Whenever you see someone on television wake up after they’ve had sex, they look like no real person ever looks after sex. It’s just the way sex is always shot, it seems even more unrealistic than it does in, well, real life. Real sex is awkward and full of absurd, funny moments.

In Louie, when people have sex, they have to think about taking their shoes off. They have to have their pants taken off both legs at the same time. They have to figure out how to get to the bed, because no one just sits on a bed. They sit on a couch. The bed is later.

This may seem overly simplistic to point out. Louie is a show obsessed with the “what is real” question in a narrative sense, but it’s also a show fascinated by the mundane. Louis C.K. became one of the most famous comics in America on the strength of the mundane as a comedic source. His show is less about how it’s all funny and more about how it all is consistent. Everyone takes their shoes off before they have sex and no one knows how to do it. There’s no sexy — or even practical — way to take off your shoes in a hurry.

It’s not all sex, but everything is that moment. Everything is taking your shoes off quickly to not let a moment pass or convincing someone to do something spontaneous before they make a joke. Everything in life is making the moment what it can be before it passes. When Louie is a sad show, it’s about missing those moments. Sometimes it’s something else, and this one is mostly something else. Just go out there and try, dummy. That’s all you can do.

The choice to run all 14 of these episodes over seven weeks seemed weird when this all started. But now, after all of the “Elevator” saga and “Pamela,” it’s clear that this was the only way to run this. It could have just as easily been a one-night binge, I guess, but then I’d be dead. This was all rough.

I don’t want to spend too much time on recapping the season, but let’s review for a very short paragraph. This is the season of a show on television where Louis C.K. rescued an old woman from a stuck elevator, went on dates with three women (four women, maybe, hard to say with the model), and opened for Jerry Seinfeld. That’s what happened. Oh, and he also went back in time to show the breakdown of his marriage and his childhood and his family and his psyche and…

…back to “Pamela 3.” Long-time viewers of Louie (hello, all 13 of you) know that Louie and Pamela have an aggressive — but familiar — relationship. They rag on each other and riff and talk in dumb voices. Even one of the most romantic moments in Louie history was Pamela getting on a plane as she yelled “wave to me, dummy,” which was mistaken for “wait for me.” Pamela and Louie have had chances, but they’ve always been caught up in the armor of acting like you don’t give a damn.

But they do. It’s just hard to tell someone else that you’re going to finally drop the cynicism or the sarcasm or whatever your deal is and engage with them. It’s hard to actually be a person, because jokes are easier a lot of the time. We make jokes at funerals because funerals suck. We’d rather not engage.

It’s an old lesson, far older than most of the ones in this season of Louie. “Pamela 3” is about not getting what you want, but it’s about something even better than that. It will make you more kind, and it’s something that I struggle with all the time. The lesson in the finale of this season of Louie has to be that you have to let other people be themselves, because that’s all anyone should ever be. If you do that, and you still like them, then that’s what love is. Not anything else.

We’ll be back next week with a different show. If you have suggestions, leave a comment.