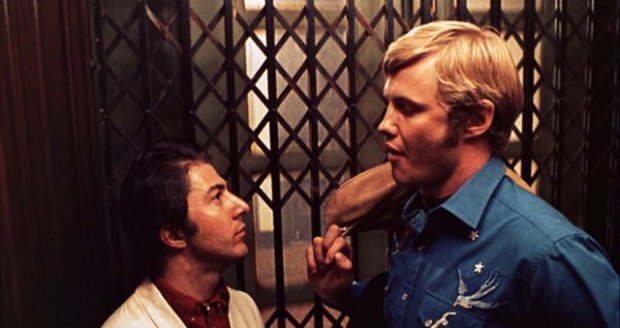 In “Worst Best Picture” we search every single Best Picture Oscar winner of all time from 1927 to present to uncover the worst of them all. Conventional wisdom says that 2005’s winner Crash is the worst winner in history. We won’t stop until we’ve tested every last one. Read the the first, our review of Crash, here. Posts will be relatively spoiler free, but there may be some details revealed. Today’s installment is the 1969 winner Midnight Cowboy. Is it better than Crash?

Midnight Cowboy has the distinction of being the only movie rated X to ever win the Oscar for Best Picture. The story of the rating system in American film history is a little absurd. I talked about that a little bit with regards to Terms of Endearment, a really brutal movie with frequent sex scenes and more frequent “adult situations,” getting a PG rating in the early 80s. Still, “X” jumps right off the page. It makes you wonder just how raw Midnight Cowboy could be.

We’re definitely in a different world in 2014. This isn’t an “X” movie, but damn it’s a tough one. Midnight Cowboy is the tale of Joe Buck’s (Jon Voight) plan to leave Texas and be a male prostitute in New York City. He’s a hayseed of the highest order, but his character really shines because he has the depressing trait of “assumed street smarts.” Joe thinks he’s figured out all the angles in every situation, and that’s the worst thing to think when you haven’t at all.

He hooks up with Rico “Ratso” Rizzo (Dustin Hoffman, who is excellent), a conman who lives in a condemned building. Joe tries to convince people to have sex with him for money and Ratso tries to convince Joe that he’s more than he seems. Joe is immediately unsuccessful and “moves in” to Ratso’s hole-in-the-wall.

It’s a story about hope and image. Both men think they have the tools to make it in the world, they just need the shot. Ratso needs a guy like Joe that he can “manage” and Joe just needs “customers.” Ratso won’t stoop to shining shoes like his old man and Joe won’t go back to washing dishes like he did in Texas. They want more for themselves, reality be damned.

We all want a little more for ourselves, and you’ll be missing the forest if you pay too much attention to the sex in Midnight Cowboy. It’s certainly a movie about sex, but the sex doesn’t matter. The main thing going on in Midnight Cowboy happens when two people shiver and get sick in an old tenement house because they can’t swallow their pride. The main thing is that we all know that guy who could get it together “if he could just make it to Florida.”

You don’t need to go to Florida. You need something else.

The Best Part: The sadness of the lead characters is extremely hard to handle. In one scene during the “hopeful” part of the movie, Jon Voight’s character has to ask a woman for crackers that he can put ketchup on to not starve to death. It takes a dip towards the depressing after that, but it’s still on the upswing, then! I list this in the “best” because the movie isn’t a direct arc, which is interesting. It’s a risky way to tell a story, but it’s like an actual life with highs and lows rather than one constant line up or down.

The Worst Part: As much as I want to make this about a downright stupid Andy Warhol storyline (sigh), it has to be the entire handling of homosexuality. This movie is from 1969, and that’s a definitive year in gay history in America. Midnight Cowboy came out a month before Stonewall, and it’s a movie about a guy from Texas being scared of being gay. It’s tough to discuss without spoiling it, but Joe frequently finds that he can make a living in NYC as a prostitute, but he’ll have to sleep with men. He’s not willing to – which is not the problem – but the anger and the weirdness of the way they deal with it in the most explosive year in gay history in America is very strange. I can’t fully condemn a movie from more than four decades ago for not handling gay issues head-on. I can be weirded out by hearing Dustin Hoffman say a gay slur about twelve times in a row.

Is It Better or Worse than Crash? We’re across the country in Midnight Cowboy, but we’ve got the same kind of “gritty city” story. The NYC of Midnight Cowboy is a sad, angry, lonely place. It’s not dissimilar to the LA that Crash wants to talk about, but this is 1969 New York City. It’s the city before they took all the porn out of Times Square. It’s the bad old days, the days talked about in really good and really bad literature. It’s a piece locked in a time that doesn’t exist anymore, and the grit is there to explain what “1969” is to the audience. Crash, as I’ve said before, exists in a mythical 2005. Racism is extremely real, but as the story of anywhere real in 2005, Crash is a bad destination movie.

Worst Best Picture Archives: Crash | Terms of Endearment | Forrest Gump | All About Eve | The Apartment | No Country for Old Men | Gentleman’s Agreement |12 Years a Slave | The Last Emperor | The Silence of the Lambs | The Artist | A Man for All Seasons | Platoon | The Lord of the Rings: The Return of the King | The King’s Speech | Rain Man | The Departed | The Bridge on the River Kwai | Marty | Gigi | It Happened One Night | Driving Miss Daisy | Shakespeare in Love | Wings