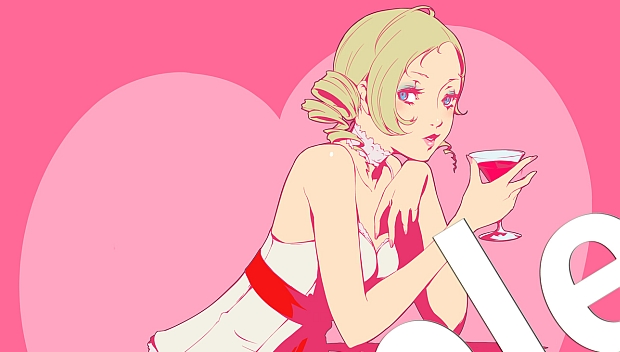 You are a real bastard.

Well, you are when you’re Vincent Brooks in Catherine, a 2011 multi-platform release that shocked the video game world. It’s a unique part-puzzle part-simulation game based on the morality of choice and what people do when no one is watching.

Depending on how stereotypical your life is, this may be hitting pretty close to home.

The story unfolds through cinematics where you watch Vincent and Katherine try to reach an understanding on various issues. It feels very real, even if the relationship itself feels flimsy. People really are scared to commit. In most narratives this would be where there would need to be a discussion of gender roles, but dear Vince has to be the nervous manchild here, because of what happens when he goes to sleep.

When Vincent sleeps he is forced to climb towers. These play out as incredibly hard puzzle elements which start unforgiving and somehow get even more brutal as the game goes on. Vincent must climb to escape something he fears — always something Katherine mentioned during the day — and reach the top of the tower to run away rather than facing adulthood, children, marriage, or whatever it may be that night. A good example: one is a horrific, monstrous baby that knows Vincent is the father.

It’s a strange game. Every night ends in the same bar, where Vincent recaps his day with Katherine to his buddies who are also in various states of arrested development. It gets extra complicated when Vincent wakes up with a (younger, blonder) woman also named Catherine, spelled with a C. Everything goes full cliche with the entrance of a younger temptress, but the world of Catherine the game needs these cliches to make choice seem as stark as possible.

It’s important to note that both Catherine and Katherine are full characters, and Vincent’s actions constantly reveal him to be a dipshit. “Competent woman/incompetent man” is a stock relationship in a lot of forms of narrative, but Catherine is interested in more complex interactions. If Vincent’s choices make him act like an asshole to either woman, that woman will respond in a full way. Neither of their lives revolve around Vincent, and even though the story plays out through his eyes, it isn’t a story of two damsels hoping that their prince will pick them.

Every decision made in the game influences a meter that tilts between good and evil. If you’re connected online, the game also tells you what percentage of people around the world made the same choice. This allows for a certain molding of Vincent – he can either accept Katherine and all of the joys that come with adulthood, or he can hide in youth with Catherine and escape for a little longer. The meter is clear which is the “good” choice, and to borrow a line one of the monsters you escape from screams at you: take responsibility.

These choices influence the ending. There are nine options, which mostly follow the traditional Dungeons and Dragons school of morality: neutral good, lawful good, chaotic evil, etc. Can a game with multiple endings still be literature? It’s a fair criticism that there isn’t “one” story since you can end up in a multitude of different situations with Katherine and Catherine. Without giving it away, though the game has nine endings it has but one lesson. There are variations, but the game constantly reminds you that escaping your future is only temporary. Not taking the phone call from Katherine because you think she has bad news only delays it. You have to deal with the people in your life – including yourself. Even if a sadistic otherworldly being won’t throw you in a tower with a bunch of sheep to enact metaphors every night as you fight for your life, the bell will still find a way to toll for thee.

It’s a solid narrative that is shaped by the world it exists in. It feels very Japanese at times, but it generally just feels like a world we’ve all definitely been in before. It also “reads” well because all of the gameplay is separate from the narrative structure in the bar. It’s a nice companion piece to the type of literature that people read when they first realize they aren’t a teenager. Catherine is the story of someone’s 20s. It’s about realizing that interactions with other people matter — to others and to ourselves — and it tells the tale of what happens when that falls by the wayside as well as anything could.