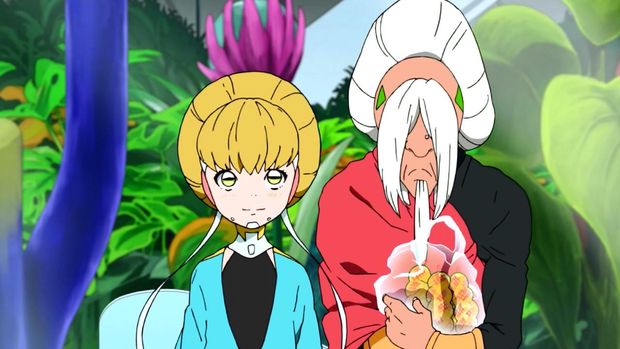 When I first talked about Space Dandy a month and a half ago, I praised the animation and commented on how odd it was to see the New York Times commenting on it. I mentioned that it really needed to learn how to balance the absurd humor of parody and the interesting nature of a universe worth exploring. It’s now seven episodes in, and so now I feel more comfortable evaluating what Space Dandy is rather than what it could be.

The show is broadcast in the United States and Japan on the same day, which allows for the US broadcast to proclaim that you’re watching the “world premiere” of every episode. It’s definitely a unique show in that regard, and the narrative elements of the show prove why they took that risk on this show.

A traditional anime series is 26 episodes long per season, with a lot of shows only getting that one season. Since not every story merits a 13-hour uninterrupted telling, one of the big tropes of anime is the “filler” episode. You meet everyone for 11 episodes and then everyone goes to the beach, or rides a train, or visits a friend in a far-away land. It’s either that or a recap show (imagine if every single sitcom had a clip show, whether they had the history to pull clips or not) and the “filler” episode is just an accepted part of the genre.

There’s no “filler” on Space Dandy, because every episode is equally unimportant. On a normal show those episodes can help explain characters by taking them away from a grinding story and forcing them to develop without advancing the plot. Space Dandy is absolutely not interested in growth, so no need to worry about getting too deep in the story to examine everyone. Everything is one plot and nothing carries over from episode to episode enough to bother with characters.

Or does it? The most compelling part of the show is the loose continuity. In one episode they surf away through space on lava coming from an exploding world. The next episode opens on a throwaway line about surfing, and then they’re done discussing it. It leads instantly into a Wacky Racers parody. It is forgotten, because it doesn’t matter.

It is easy to use this decreased emphasis on character to explain the problem with what Space Dandy is not: a reasoned discussion of the role of sex and gender in anime. Space Dandy is built to make fun of every single thing traditional anime does — right down to the hapless bad guy that doesn’t even seem to be trying very hard to catch the good guy — but it handles women so poorly that it’s tough to tell if it’s failing at the joke or legitimately doing a bad job with the topic.

There is an aggressive dedication to parody in this show. The lava-surf-riding episode ends with a nonsensical song about what happens after the end of forever. It’s impossible not to see this as a send-up of some of the more fantastical elements of animation. They nail this so hard that anyone who recognizes the joke will love it. Why can’t they also spoof anime’s gender problems that well without adding to them?

Space Dandy the show is about Space Dandy the character hunting aliens down to register them in order to make money. His crew is a genderless robot (voiced by a female, but the gender never matters in the show) and a cat whose gender is established but never really matters. Lest I be labelled as looking for a problem here, let’s look at the only thing that happens in every single episode of Space Dandy: he tries to find the closest Hooters-clone restaurant. 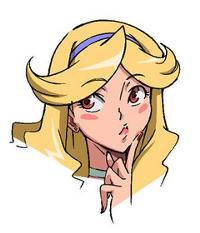 Honey, essentially the only female on the show, is in every restaurant. After 3.5 hours of the show she still does not have any real character elements; she’s mostly played as a pleasant-but-simple person who likes that Space Dandy keeps coming to the restaurant. Her outfit is absurd. She’s a waitress at outer space Hooters. Use your imagination, not your Google.

The argument here is if it is “joking” with the ultra-masculine pompadoured-Dandy and his approach to women. At a certain point, does it matter? Sure, naming the restaurant “Boobies” shows that you’re trying to be a little sly with the attitude towards it, but if you keep going back to it what does it matter what the intent is?

Other than Honey, who has absolutely no character to speak of, the only time the show has dealt with gender at all is in the episode “A Merry Companion is a Wagon in Space, Baby.” Dandy meets an alien that he can make a buck off, but the little girl has the power to turn someone into a stuffed doll once a day. The plot of the episode works as a “journey” while the two have to learn to get along on the way, but the slow development of the little girl as a character that matters feels glacial. She finally earns Dandy’s respect as a peer, but it is entirely dashed when it comes out that she just wants to grow up and “hang out” with Dandy. After working so hard to develop a character — a rare attempt for the show — they finally decide she is only valuable as she relates to the male protagonist.

Space Dandy the show is rarely about anything other than the absurdity of Space Dandy the guy and how much he wants to find some women, but that lens is no excuse for the way this show excludes half of the world. The creators of Grand Theft Auto 5 went on the record saying that their game features three playable male characters and no female characters because “the concept of being masculine was so central to this story.” People didn’t buy that and people shouldn’t buy this. Anime has plenty of powerful women, but it’s largely a space occupied only by women defined as sexual objects. If Space Dandy wants to mock the genre, it would honestly have to get even more absurd to handle the topic this way. As is, it comes off a lot like GTA 5: part of the thing that it’s supposedly making fun of.

There’s a lot to like about the animation and narrative risk to Space Dandy, but the world is hollow because it’s half empty. It’s a phenomenal show because of what it lampoons and the success with which it does so, but it’s hard to imagine this show couldn’t take down the sacred cow of anime: the limited role of women. Hopefully, it will. It might want to start with itself.

In 1998 Shinichiro Watanabe created what turned out to be a very accessible anime series for American audiences when he developed Cowboy Bebop. Bebop was a big hit in the United States, even for people who weren’t devotes of the artform in general. It was an easy to watch, action-packed show with a soundtrack that was “cool” in the way “cool” is supposed to be used. It was flashy, but not bright like Dragonball Z or Pokemon. It was soaked in booze and smothered in cigarette smoke and it was a perfect introduction in style and content to a world that a lot of Americans had never given much thought.

The show ran on the very first night of Cartoon Network’s Adult Swim block of shows in 2001 and continued to rerun through the end of last year. It would be a mistake to say that Watanabe took America by storm and became a household name just as much as it would be a mistake to blindly assume everyone knows the first damn thing about Cowboy Bebop. It’s just more likely that you’ve heard of the show that was supposedly going to be adapted to a live-action version with Keanu Reeves than you have heard of, say, His and Her Circumstances.

You don’t need to know everything about the world of anime to understand Watanabe’s new show that runs on Adult Swim on Saturday nights, but it’ll certainly help. Space Dandy is the story of a man named Dandy who travels the outer reaches of space in search of new species of aliens. He needs to report them to a more-than-global database to make a living and to fuel his real purpose in life: visiting every location of a Hooters-parody restaurant called, well, “Boobies.”

Bebop isn’t super-serious all the time. The series begins its 26-episode run with episodes about chasing a dog through busy street markets and cheating dealers in casinos. As the story develops the emotional core of the show grows darker and darker until it’s so gritty it gets almost maudlin. Around the sixth flash of a character dropping wrapped roses to the far-away tune of a music box, it brushes against the line between sad and sappy. It doesn’t cross it, though, and in that line lies the ability to make an animated show feel more real than a live-action one.

It’s assuredly unfair to compare Dandy and Bebop. For one thing, Bebop is done. It became much more than the sum of its episodes by the end. Dandy has only had one episode air so far (“Live With the Flow, Baby” which you can watch here) and has a long way to go to develop into whatever it’s going to be. Should you watch it develop? That all depends.

The New York Times praises the animation and calls the worst of the humor “cringe-inducing.” There’s two important things to mention here:

Dandy (the show and the character) is ridiculous. It’s designed as a parody of traditional anime, which the Times gets right and you can read their piece to read about influences. The first half of the first episode is some of the broadest television that’s ever been broadcast. Dandy’s sidekick (an android vacuum cleaner…kinda) shrieks and worries that they are “breaking the fourth wall” too early. The characters are all ridiculous and if you don’t constantly remind yourself that they’re ridiculous to mock an existing style then they might feel too slapstick to handle.

The parody is so direct that it reminded me of a terrible movie I saw as a kid. Mafia! was ahead of its time in a bad way. It’s also a genre parody that’s the same joke as the Scary Movie franchise. You know mob movies? Here’s every mob movie. That’s the joke! If you don’t know the source material it can feel like it’s just bad jokes.

You should stick around for the second half, though. Dandy captures what he thinks is a rare breed of cat alien, but it’s just a cat. The cat takes Dandy to where the real weird creatures are and the episode picks up from there. There’s no need to ruin the ending, but the variety of creatures and inventive art style are worth the price of admission that the weird opening charges you.

If it sounds like I’m wavering it’s because I am. The bad jokes in the first half are really bad at times and I’m hesitant to recommend this to people as it stands right now. I can do so only because the final animation sequence got an audible “wow” out of me, and it’s really not that often that animation does that anymore. If the show strikes a better balance between the goofs and the interesting universe itself, it will probably find an audience on Adult Swim. For now, though, it’s odd territory on American television that you should still see to believe.