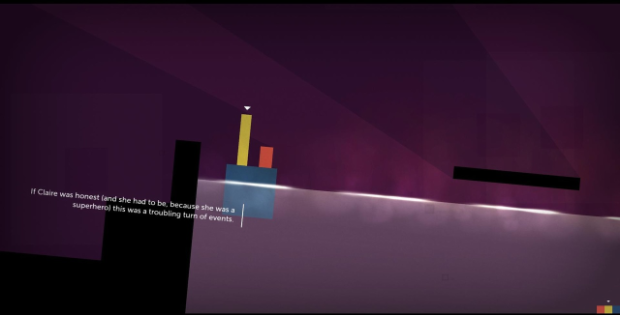 Thomas Was Alone is an indie game developed by Mike Bithell that was originally a simple flash game, but was then expanded upon to become a full release for major platforms. I had the pleasure to play this game through Steam after picking it up on sale for something like 30 cents.

The game itself is a simple platformer that asks you to take basic four-sided shapes and help them reach their portals located somewhere in the stage. This is simple enough, and the learning curve may be the best one I have seen in a puzzle platformer. I never felt the game was too easy and, on the other end of the spectrum, I never had to resort to looking at a guide to solve an unfairly complex puzzle. This all benefits the game overall since this allows a lot of focus on the story of Thomas Was Alone.

The narrative of Thomas Was Alone is by far its strong suit. Bithell manages to use the 100 levels of the main game to bestow personality onto the most basic shapes you can have. This is done through narration that either occurs at the beginning of a level or at certain trigger points in a level. The narrator is perfect at  giving each shape a special flair when they are talking  and I must admit it doesn’t hurt that it is a pleasant British one to boot (I feel like semi-snarky, British narrators are practically a must have for text and dialogue-heavy games).

Thomas is the first shape that you meet and you quickly learn that he and his other cohorts are artificial intelligences that have become sentient. Their goal is to acquire knowledge and escape the system, which in terms of the real world would mean floating around freely in the internet. This is a pretty interesting story for a rather short game (I beat it in 4.6 hours, according to Steam) but there are some flaws. The most obvious issue with the narrative is that nothing is really fleshed out. You have a team of shapes and they are very clearly unique: one can float in water, one can double-jump, and Thomas is the “Mario” of the team as the all-around shape. The personalities portrayed also help flesh out the characters, as each is a relative extreme. I found myself thinking “Orange Square is a dick but his relationship with Long Rectangle is endearing, so let’s make sure they help each other a lot.” This is a complete success in storytelling and I am happy that I found myself making these little mental decisions in much the same way I did in the game Journey.

The design decision to go level by level with snippets of the story means that the end has to come by chapter 100. This is a platformer though, so it is obvious that you can’t have the player sitting and waiting for the narrator to shut up to finish a level. I think Bithell hit a relatively sweet spot in Thomas Was Alone, but I was definitely left wanting just a bit more story by the end.

Another issue with the story is that at times it completely interrupts the gameplay, or vice versa. I found myself on more than one occasion going through a level too quickly when the narrator was far from done, so it turned into an audio novel as opposed to a game. The same thing happened when I was expecting more narration in a level and it wrapped up really quickly. It could be argued that this wanting of more storyline is a success, but it truly just felt disjointed and too noticeable.

Thomas Was Alone takes the bare minimum in terms of graphics and gameplay and gives some heart and soul to it. Each character has their strengths and weaknesses, but together they accomplish something far greater than all of their parts. The growing of the AI characters throughout reminded me of the film Her, where I could imagine this being the prequel of sorts to the story of the AI represented in that film. In both, the AI are never portrayed as malicious, but instead as beings with the ability to absorb and attain knowledge at a rate that far exceeds that of humans. This vast knowledge doesn’t lead to a Terminator type insurrection from appliances but instead shows that AI quickly pass the human emotions phase. Skip the murder everything phase and get right to wanting to be seen as equal “beings.”

I kind of like this new approach to AI that Hollywood and the gaming industry have begun to take, because it really opens up a lot of interesting thoughts about what could happen if computers grew feelings. The 80s and 90s automatically figured that nothing good could possibly come from it, but these days, as computers become as much a part of life as breathing, it is nice to see that there are more options for narratives to take than that of The Matrix and its ilk.

Thomas Was Alone is a good game, not great by any means, but well worth the price and time that it asks you to invest.