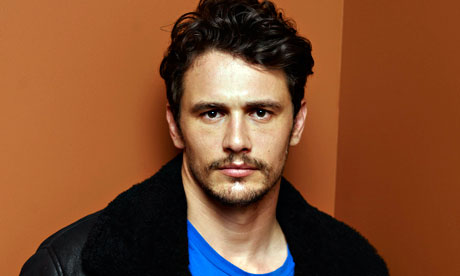 To tell you the truth, I don’t know why I get so irritated by James Franco. I just do. Anyone who knows me will tell you that, in general, I’m not a very nice person, and it’s no surprise that I (oh yes even I) have found a celebrity that I use to channel all of my frustrations with personal failures onto. I mean, c’mon, look at this stupid face.

But that’s not what I want to write about. I want to use this space below to try, in some way, to figure out why Franco is doing what he’s doing, to try and get inside his head. Recently, amid all the Facebook and Twitter fire he’s been getting from his newest poem in DIAGRAM and his “book review” that showed up in Vice, a friend of mine, someone whose ideas I take very seriously, asked us (the hungry pack of MFAs who love to trash Franco at every turn) to take a step back, to consider what he’s doing from a different angle. For her:

Uncomfortable as it makes me to admit it, I am interested in [Franco’s] perspective. He’s an actor, and I think he’s a good one. Acting is a delicate and demanding kind of translation. I can grant that he has an aptitude for art, although not so much for the medium he has fifty degrees in. He has the rare (among poets/ardent fans of poetry/scholars) distinction of having a great deal of influence in Hollywood — he’s at liberty to try things most poets/fans of poetry/scholars are not. That has some value to the world… and I’d rather it exist than not, even if he doesn’t please other poets/fans of poetry/scholars with his output. In other words, I think he’s in a position to do some great things, and unfair as that may seem (esp. given the shit-tons of good poetry by non-names that goes uncelebrated, unpublished) I’d rather him try those things and disappoint us than not try.

This got me thinking about what, really, his project could be, what he could be getting at, what sort of aesthetic he’s actually after. Sure, we all know him as the Frank-Bidart-imitating, couldn’t-write-his-way-out-of-undergrad-without-his-name poet who keeps producing less-than-satisfactory work (by poetry culture’s [hahaha like that’s a real thing] standards anyway) to sell to a massive (for poetry) audience, but why? Does he maybe have a grand idea that his writing chops just can’t approach?

I figured the best way to clarify this was by having a conversation with him. Of course, I don’t know him (though we almost went to the same graduate program for a minute), and I doubt he’d talk with me, but he has such a body of work (poems, interviews, book reviews) about writing, that I think his opinions on the matter are pretty much available.

Austin Duck: At what point did you get interested in poetry? How do you see it relating to your experience in acting? Your vision of making art in general?

James Franco: I was in my first year at NYU, and our assignment was to make a short film that was an adaptation of a short story. They gave us a list of stories to choose from, but at Warren Wilson this teacher I had brought in Frank’s (dark, disturbing, serial-killer driven) poem “Herbert White,” and it was amazing. That was the first time I read him. And I think I have since learned to be awake to those kind of moments, when you get impulses of connection. These impulses are visceral. It wasn’t only because it was about a killer. The killer had been fused with something else. Frank [Bidart] was playing with both sides of the coin. There are moments in the poem when the killer takes down his mask, and the poet shows through.

AD: So you feel like art is a kind of simultaneous masking and de-masking? Both a mirage come up and a human come through? Would you care to say more about that?

JF: Sometimes, I would like to live in a tight space and be a spy on the world. When I was younger, when I had no friends, my mom drove me to school because I lost my license drunk-driving, and we wouldn’t talk, we would listen to Blonde on Blonde every morning, and life was like moving through something thick and gray that had no purpose. And now I see that everything has had as much purpose as I give it, [it carries] less and less of [its] original pain, And become(s) emptier, just [a] marker really, building blocks, to be turned into constructions and fucked with.

AD: So memory for you, then, is what? A marker? A mask? Is the past a kind of costume you slip into when you think you can remake it? I know you’ve done some work in performance poetry as well. Would you say that this idea, the idea of performing a past self, a self othered, is key to the art that you make? I mean, there’s no doubt in my mind that the othering is absolutely necessary in acting; even in This is the End, when you play yourself, you’re not really playing yourself. You’re taking a construction and “fucking with it,” right?

JF: I write confessions and characters, and that sort of thing. [Once] I called my class at UCLA, and told them to watch Apocalypse Now, and that it used Heart of Darkness as a model, and that we’d watch Eleanor Coppola’s Hearts of Darkness, the making-of, the following week, I told them Hollywood and its high and low priests and priestesses become icons that [we] can manipulate to find poetic truth rather than journalistic proof. I guess you can read it as fetishizing, but it’s more of an ironic form of fetishizing. Once I choose a subject, I’m not going to shy away from portraying that.

If you go back to something like General Hospital, it’s because I like that it allows for people to look at something with fresh eyes, or to rethink a situation. If it’s my involvement that does it, and I’m going against tacit beliefs of entertainment hierarchy, if I’m messing with that, that’s interesting to me.

AD: So while you have interests in characters, in the cracks that appear in their personas, you’re more interested in pushing formal boundaries, messing with people’s perceptions of who you are? Can I ask you something blatantly? Are you more interested in the work or in how the work makes the public perceive you?

JF: I’m going to try to not let anyone put me in a box, and that certainly applies to the things I do outside of acting. There’s a tacit belief that actors shouldn’t write books, they’re sort of allowed to direct movies but there will be a lot of skepticism, and they shouldn’t do artwork, or music. There are these invisible roadblocks to gain entrée to these areas for actors, and you kind of have to crash through those invisible barriers. I know why those barriers are there. People are skeptical of anyone who has any bit of celebrity going and doing anything else because they might be wary that they’re cashing in on their celebrity, or that they’re doing these other pursuits not because they’re genuinely into them, but because of their celebrity in other areas. I understand that skepticism, and think it’s valid. But I told myself that if I was going to go back to school and study these other things, I knew I was going to get some shit, and that people were going to be prejudiced without even knowing what I’m doing, and that’s the price I have to pay for doing what I want to do. I think a lot more people that “care” and pay attention to what I’m doing have turned and understand that I take all these other disciplines seriously. I think it’s better now. I’m sure I still have a lot of haters, but I don’t really interact with them.

AD: It seems to me, then, that you’re interested in something a little more “pure” than many people give you credit for. “Poetic truth” I think you called it. How would you characterize that “truth?” Is it the same “truth” that you’re after when acting?

JF: If I were to act in the film about Obama, all I would need to get down, aside from the outer stuff—and I know that’s important—is his essential kindness. Poetry’s just like that, like hearing a performance going on. It is a portrait in some ways of someone trying to make sense of his world. I was taught to grab a reader, not push them away, and, I guess, that’s what I know of how to be a poet. The way I view it, poetry is like the movies, this monster at the center of the room, articulate, and behind it, a poet figure peeks out, a torque that acts as a through-line to ideas. And his ideas came out of a cheap, dime-store, medical case study that came out of Lowell and Bishop and Ginsburg. It goes on and on. Remember that the bricks of LA were mortared with thick Indian blood.

AD: Oh I see, so it’s about history. You seem to see the poet as inhabiting a kind of history that she makes, again, human, that we’re all imitating one piece or another and, in finding what’s human in the work, we find it with ourselves. Your work, particularly, engages in the history of Hollywood, the history of film, just as your films seem to be engaged in the history and the moment of literature. I think I get it: You engage in Hollywood because acting and film, like poetry, are obsessed with moments—of masks dropping, of traditions shattering and becoming alive. The history of literature and film are all about reinvention, about bringing back the dead, and, as I think you know, the only way to do that is with the human, the real. Is that about right?

JF: Hollywood is an idea. I want to get into the thick of it. Movies won’t be around forever.

AD: Do you think you’ve achieved this in your work?

While I still think that Franco’s written work, ultimately, isn’t very successful, I think that he has a vision and is pursuing a worthwhile project.

Fuck. I have a lot of tweets to delete.