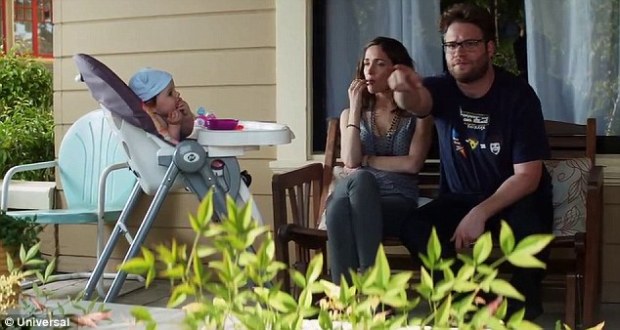 In our rarely-running kinda-series Should You See It? we talk about movies that just came out. You can figure out the rest of the premise from the title of the series. That’s right: We talk recipes. Should you see Neighbors?

Neighbors is a movie that tries to bridge two kinds of comedies: the buddy comedy and the relationship comedy. The couple (Rogen and Byrne) uses the standard “bros before hos” as part of its trap against the fraternity invaders, backfiring wildly into what seems to be the start of a very different film. Needless to say, the film is billed as a comedy, so by stricter terms, it follows on its promise, reaffirming the relationship between the couple at the film’s heart. However, when I asked my friend Elizabeth what she thought about the focus of the film, she said it was more of a misguided bildungsroman for Zac Efron’s upper half, and I would have to agree. The movie tries to affirm some kind of epiphany on the part of the fraternity president as to what must come after graduation, yet it also clings more so to the couple’s determination to face what they must together. The new parents commit vandalism, trespassing, and (some may say) negligence to enact their wild schemes against the admittedly loud and obnoxious fraternity house 24-hour party machine; does this bring them down, or make it clear that some people will do almost anything to achieve comfort?

I’m no stoic; I laughed out loud plenty of times. Sex and drug jokes abound, reaffirming pot as the social drug of the new century. What really held the film together were the ancillary characters: Lisa Kudrow as the Dean, Hannibal Buress as the policeman, the fraternity as its own character. While I was compelled by the main plot(s) of the film as a comedy of manners, I found Efron to be stiff in front of the camera in contrast to the couple, a veteran pair in their own rights. Perhaps it’s because the film is of two minds that he seems weak in comparison; I’d never seen him in a movie previously. I did appreciate the continuation of the depiction of the American couple as two people who can be fun together, despite their seeming nefariousness as they manipulate others.

Should you see it?

What to take away? We get older, and it sucks sometimes, but sometimes it’s really cool. Abs help?