The 24-issue Rising Stars is an interesting tale of a group of children that attain superpowers via an intense flash of light from a comet. These children were all yet to be born and therefore only 113 of them receive this “gift.” They grow up with their powers and become known as the “Specials.”

The story behind Rising Stars is definitely where the main interest lies. There has always been human interest figuring out how life would be if people had abilities that made them a cut above a normal human. This is regularly touched on in X-Men’s Sentinel saga, also with Lex Luthor’s general hatred of Superman being a living god. Rising Stars turns this on its head in a very satisfying way by limiting the powers that are given out to a set group of people and having them deal with being the extreme minority on the planet, yet wielding all of the power.

As can be expected, the Specials have their own personalities and hopes and dreams, as normal people do. They also are not all made equally. There are some individuals who are the Superman archetype and others that fall more into the hyper-intelligent brand of superhero. This disparity in skills causes schisms among the Specials themselves since some individuals feel they are of a superior nature to others.

The main plot gets rolling when a few Specials are murdered and it is obvious that one of their own is committing the crimes. This is all narrated by the last living Special, John Simon (aka Poet). John narrates the discovery that, with the murders the energy from the dead Specials is transferred to the remaining ones (Think Jet Li’s great film The One).

Like this, but Jet Li has the skill set of a Super Saiyan.

This is just the tip of the iceberg and the reader gets to go on a special journey in the lives of superheroes, which is watching their full lives begin and end. Specials have all the power in the world, yet they have the same limitation normal humans do: time. Another underlying tale unfolds as well, which is how humanity would try to deal with suddenly falling from the apex predator perch.

The art here isn’t really impressive. It isn’t bad, by any means, but the coloring and artwork definitely feel like a typical comic book. I would say if you were playing a game of charades and had to draw comic characters, Rising Stars would be the perfect point of reference. Held up next to League of Extraordinary Gentlemen, or East of West it fails to have that same visual impact. 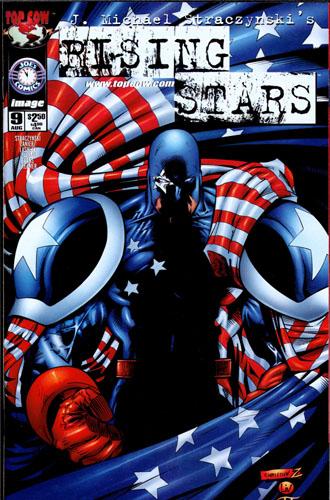 Considering there are a mere 24-issues and three mini-series to get acquainted with the Specials there is a lot of ground covered. 113 is an impossible amount of characters to introduce and give personality to and intelligently author J. Michael Straczynski doesn’t attempt to. Each of the Specials mentioned in-depth in the comics are all interesting and either have powers you need to actually see to understand or have personalities so strong that you want to know what makes them tick. The inclusion of archetypical superheroes is also done intelligently. How would a real Batman act? You get to see it here. What would someone with multiple-personality disorder do with the ability to control other? Also in here. I found myself loving and hating characters and then merely understanding them by the end of the series and I loved it.

Worth the read and time to complete?

My God, yes. This feels like a brilliant deconstruction of the fantasy of superhero living a la Watchmen (not saying it is as good or anything). There are 24 issues and it really makes you think about what life would be like if you did have amazing abilities but knew you’d die at 70. My only complaint is that it does end very neatly, but I would prefer that over feeling unfulfilled at the end.

Images: Header image from here, other images here and here