As we consumers of culture grow older, our inner critic grows louder. A new band we might have liked ten years ago we now quickly brush off as a carbon copy of an earlier incarnation. The latest Coen brothers’ could never be as good as past efforts. With every passing year, we append new cultural experiences to our collected “Experience,” thus making it increasingly rarer to experience that work of art that shushes your inner critic so that you can actually enjoy it. Not to say that critiquing (or even tearing apart) works of art isn’t its own form of enjoyment. But that’s for another article. 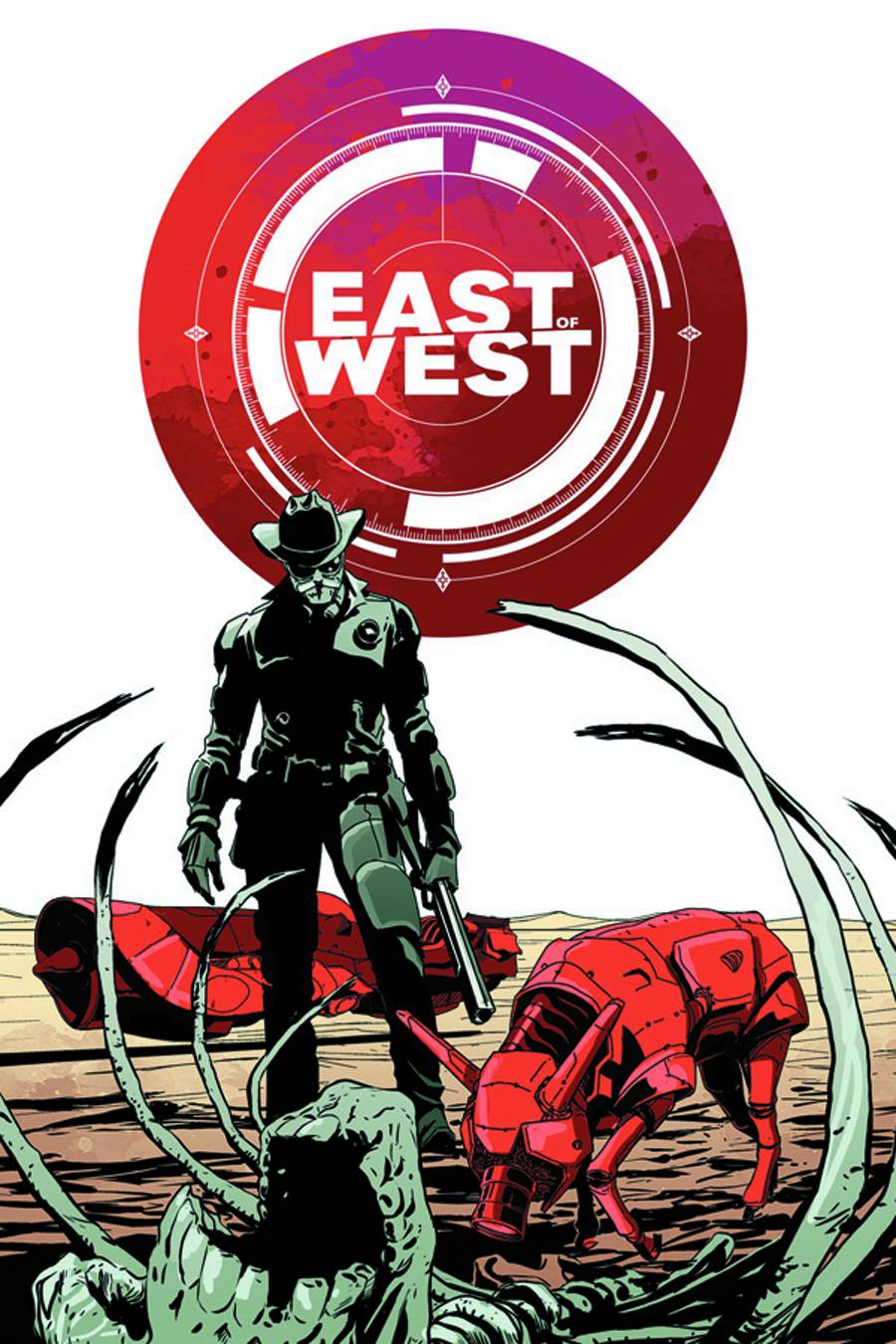 It wasn’t until undergrad that I got into graphic novels. It wasn’t until after grad school that I got into comic books. If you don’t know the difference, here’s a clip (courtesy of ABC Family) of someone asking the question and then two people kissing. All that to say, even though I haven’t been a lifelong fan, I feel that I’ve read enough to know when I’ve found that rare specimen. That specimen, in this case, being Jonathan Hickman’s and Nick Dragotta’s East of West.

How to describe it? I use the word “badass” selectively. Sure, I live in the South where badass is an endearment ascribed to everything from camouflaged iPhone cases to comely sunsets. I used it once at a Nine Inch Nails show when Trent Reznor kicked over his keyboard, and in spite of myself at a monster truck show when Grave Digger jumped an improbable number of wrecks. Like I said: I’m Southern.

I think I want to give East of West that most Southern laurel because of how much weight Dragotta’s art carries, how every panel is filled with gravity and action and consequence, with no frills, nothing wasted. It’s like reading the storyboard of a Darren Aronofsky film: every shot means something. The following is a collection of unrelated panels (no spoilers) that I’ll use for example. Every shot is packed with a story that demands to be read, understood, savored. 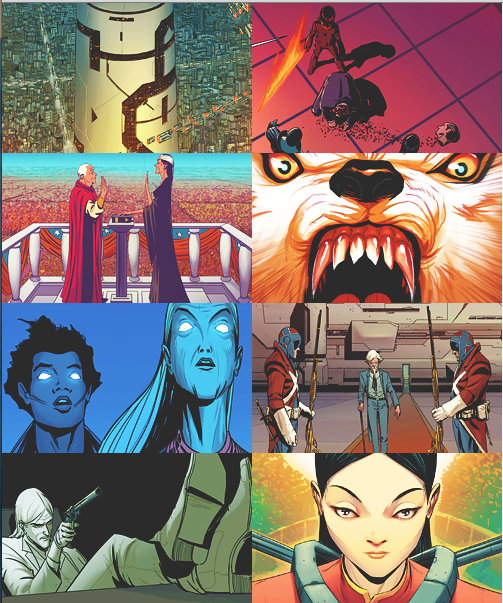 It’s the color palette, it’s the framing, it’s the energy in each panel that whispers “I know something you don’t know”, and so drives us onward. Dragotta fully realizes Hickman’s dystopian sci-fi world, a grand scale epic that includes vast cityscapes, a cadre of unique characters, and wonderfully offbeat technologies like horse-bikes. It’s artwork like this that primarily hushes my inner critic. Even if the story wasn’t good, the artwork alone sweeps you up. But the story. Oh, man, the story

If Sturgeon’s law is to believed, 90% of everything is crap. This is definitely true for comic books, where at least 80% of comics are about superheroes with dead parents–nothing lightweight about dead parents, but come on, comic book writers, pick a new backstory for Chrissake. The story behind East of West is…complicated. In a nutshell, it’s a dystopian sci fi story about three of the four horsemen of the apocalypse–Famine, War, and Conquest–who arrive on earth to end it all, but the fourth horseman, Death, doesn’t show. Death, personified as a colorless Clint Eastwood-esque cowboy, is off on an errand of his own. As the three horsemen track him down, elite members of the warring nation-states plot to end the world rather than settle their differences.

What makes the story so special is that Hickman embraces the essence of American mythology: there is not one, but many American mythologies. Contained in East of West is the myth of the cowboy, the religious zealot, the industrialist, the South vs. the North, the South (white wealth) vs. the South (free slaves), tradition vs. technology, the indigenous vs. the immigrant, and more. Hickman collects these multifarious mythologies and we get to watch them squirm. As crowded as that sounds, as rife as that premise is with the potential to wholly miss its mark, it somehow doesn’t. There are worlds contained in East of West, and, so far, its creators have told its story well enough that when I open up a new issue, my inner critic takes a walk.

Luckily, the series is only 12 issues in. Get the first five in trade paperback for under $9 on Amazon or for around $10 at your local comic book store.