In “Worst Best Picture” we search every single Best Picture Oscar winner of all time from 1927 to present to uncover the worst of them all. Conventional wisdom says that 2005’s winner Crash is the worst winner in history. We won’t stop until we’ve tested every last one. Read the the first, our review of Crash, here. Posts will be relatively spoiler free, but there may be some details revealed. Today’s installment is the 1942 winner Mrs. Miniver. Is it better than Crash?

If Patton is the story of people who choose to make war their entire life, Mrs. Miniver is the story of people who don’t have a choice about it. It’s an entire movie about the homefront in war. It focuses on events at home — both mundane and not — and how they are complicated by the ridiculous nature of war. Cavalcade and The Best Years of Our Lives are also about that, but they’ve got much different messages than Mrs. Miniver.

This one is entirely about suffering and liking it. In another setting, a movie about being resilient in the face of strife on this scale would be a tough sell. A movie about the British resistance at home during WWII, though, we’re comfortable with that story. The entire international perception of England was changed by WWII. It is taken as fact that the British are tough and can handle the worst without complaint. It’s just one of those “things” now, and Mrs. Miniver was an important part of that myth-making.

There’s nothing going on in Mrs. Miniver other than the war. Men decide they need to go to war to protect Britain and the women need to stay home and be brave and true and good. It’s full on propaganda, but it’s distinctly Western propaganda (and Allied, I suppose, which is an even easier sell) so an American audience may not feel as manipulated. It’s just two hours of bad things happening and good people staring into the middle distance while they wonder how they’ll move on.

They’ll move on because they’re British and because they must, is the message, and it’s told again and again. There’s no real reason to watch this in 2014. You’ll get everything you need from any particularly badly written history book. The bombing of London is one of the iconic domestic tragedies of our time and a movie about the bravery and difficulty involved in surviving it is nothing to roll your eyes at, but at one point the entire family reads Alice’s Adventures in Wonderland under a staircase and it’s just a ton. It’s heavy and it should be, but other than the patriotism, there’s no there there.

The Best Part: The titular Mrs. Miniver captures a German soldier in her garden and they have a terrifying conversation in her kitchen. She makes him a meal at gunpoint before getting his gun away from him. This scene is either the greatest or worst part of the movie, and it probably depends on what you want Mrs. Miniver to be. If you want to marvel at strangeness, look no further.

Is It Better or Worse than Crash? I hate to say it, but I’m only 100% sure I’ll never watch Mrs. Miniver again, of the two. I’m going to watch Crash again this week for a rewatch, but I feel no need to watch Mrs. Miniver again. I got it. It’s not a bad movie, but it’s one-note and it’s fairly repetitive. Crash is much worse, to be sure, but only because there’s not really that much in Mrs. Miniver to love or hate. If you boiled down any movie to three words you’d be missing nuance, but I don’t think you miss anything with a three-word summary here: British people endure.

Worst Best Picture Archives: Crash | Terms of Endearment | Forrest Gump | All About Eve | The Apartment | No Country for Old Men | Gentleman’s Agreement | 12 Years a Slave | The Last Emperor | The Silence of the Lambs | The Artist | A Man for All Seasons | Platoon | The Lord of the Rings: The Return of the King | The King’s Speech | Rain Man | The Departed | The Bridge on the River Kwai | Marty | Gigi | It Happened One Night | Driving Miss Daisy | Shakespeare in Love | Wings | Midnight Cowboy | Rocky | Gone with the Wind | Chicago | Gladiator | Cavalcade | The Greatest Show on Earth | You Can’t Take It With You | The Best Years of Our Lives | The Godfather | Casablanca | Grand Hotel | Kramer vs. Kramer | The French Connection | In the Heat of the Night | An American in Paris | Patton | Mrs. Miniver 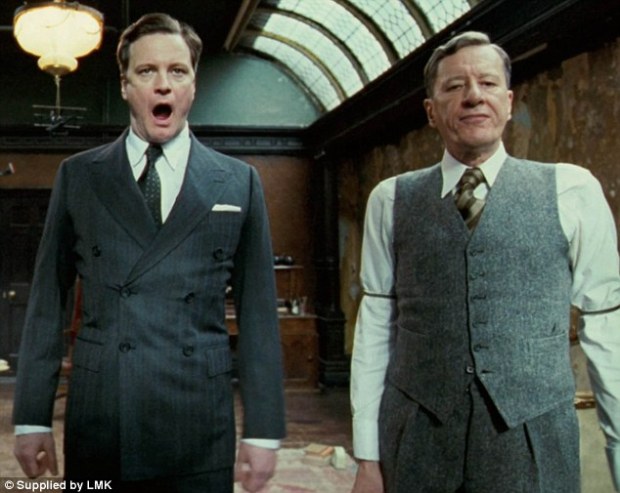 In “Worst Best Picture” we search every single Best Picture Oscar winner of all time from 1927 to present to uncover the worst of them all. Conventional wisdom says that 2005’s winner Crash is the worst winner in history. We won’t stop until we’ve tested every last one. Read the the first, our review of Crash, here. All posts should be considered to have a blanket “spoiler alert” on them. Today’s installment is the 2010 winner The King’s Speech. Is it better than Crash?

The toughest job The King’s Speech has is convincing the the audience that it’s rough out there for the King of England.

The premise is amazingly simple: The king has a stutter, but he has to give a speech to rally England against Hitler. This is a movie that was up against Inception for Best Picture in 2010, and it’s hard to imagine two movies farther apart on the “complicated” spectrum. If anything, The King’s Speech feels even simpler than that boiled-down plot. It doesn’t always suffer from starkness, but it’s almost entirely devoid of supporting characters, solo scenes, or anything else that would distract from the absolute brass tacks of one man teaching another man to enunciate.

King George VI (Colin Firth, who won an Oscar for the role) starts the movie as just a mere prince, and the movie opens with him speaking to a massive assembled crowd. He cracks and can’t do it, and thus a conflict is born. He understands the importance of public speaking, but his brash older would-be-king brother is next in line anyway. His brother ascends and descends the throne, and there’s your ballgame: George has to learn to speak publicly.

His wife (played by Helena Bonham Carter, who was also Oscar-nominated for the role despite really not getting enough to do) enlists the Australian Lionel Logue (Geoffrey Rush, nominated as well) to work a miracle. I mention the “‘Australian” there because it’s always remarkable how often a movie about high class British society has to remind the world that you can turn anything into an excuse to belittle someone.

Firth said after filming the movie that it was somewhat of a challenge to fully return to normal speech after affecting the stutter for the role. It’s a remarkable performance, to be sure, and it really sells the “journey” of the character. Rush is mostly there for Firth to bounce off of, and everyone else in the movie is barely there at all. There’s a particularly — this is the only word for it — distracting performance by Timothy Spall as Winston Churchill which just comes off as intensely weird. Firth is intense and Rush is light-hearted, but that’s all we’re sure of. The movie isn’t always sure what to do with everyone else.

The movie’s “awesome” in the way that all movies about British royalty are big and flamboyant. A lot of the criticism for The King’s Speech centers on how the movie doesn’t deal with Britain’s role in appeasement with Germany leading up to World War II, but aside from the two main leads, it doesn’t really take time to do much of anything. It’s hard to see where they’d find the screentime.

The Best Part: The final, titular speech is great, sure, but the real gem is the lead up to that. Just as King George VI is finally finding his voice, Logue is found out to be a self-trained speech therapist. Their conversation in Westminster Abbey is superb. I don’t know what kind of person would take my word on this but just watch one scene, but if that’s you, get to it.

The Worst Part: At one point Helena Bonham Carter (when she’s still just a duchess) appears to Logue to ask for his services. She wants to be discreet about asking for treatment for the Duke of York, and he clearly has no idea who she is. Later in the film — though at this point she is the new queen, I suppose — Logue’s wife is speechless upon running into her. In both scenes Carter’s character is who she needs to be in the moment, but in neither scene is the movie interested with why characters react that way to her. It’s a slight complaint, but it’s the kind of thing that makes the characters so strange in this movie. No one cared enough to spend time on those little details, which is odd. Maybe I just love Helena Bonham Carter?

Is It Better or Worse than Crash? Yeah, this one passes the test as better than Crash. It’s a powerful movie even the second time around. It made me consider this, as well: What movies will be remembered as “the greats” from this era? Everyone will always list The Godfather and Casablanca as legends of a previous era, but what does the 2010s have? It already feels weird that this and The Artist made that list. I have to think that 30 years from now if someone asked about The King’s Speech someone would remember it as a “powerful” movie more than a “great” one, but there’s certainly no shame in just being something worthy of note.

Worst Best Picture Archives: Crash | Terms of Endearment | Forrest Gump | All About Eve | The Apartment | No Country for Old Men | Gentleman’s Agreement |12 Years a Slave | The Last Emperor | The Silence of the Lambs | The Artist | A Man for All Seasons | Platoon | The Lord of the Rings: The Return of the King |