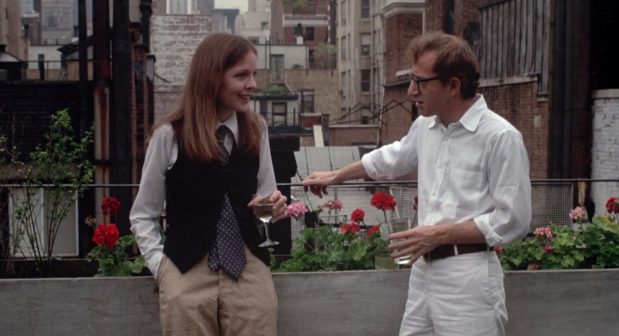 In “Worst Best Picture” we search every single Best Picture Oscar winner of all time from 1927 to present to uncover the worst of them all. Conventional wisdom says that 2005’s winner Crash is the worst winner in history. We won’t stop until we’ve tested every last one. Read the the first, our review of Crash, here. Posts will be relatively spoiler free, but there may be some details revealed. Today’s installment is the 1977 winner Annie Hall. Is it better than Crash?

Woody Allen is divisive, and even though he’s one of my favorite filmmakers, I can’t spend a year talking about Clint Eastwood and Mel Gibson and not touch on Woody Allen. I’ve been dreading this one, and the reason it’s last is twofold:

I can’t say that I’m not going to watch Woody Allen movies anymore, because I think I’m still going to, but I can say that the experience is complicated. I think that Woody Allen’s legacy is not going to end up being a great one, no matter what part you’re talking about, and I want to be very careful in my praise for him and discussion of this movie. There are other, better places to talk about Woody Allen’s legacy. I want to be certain to not skirt the issue, but there’s nothing I can add to the discussion other than the fact that I think everyone should think very hard about the media they consume, even if they don’t mean to send a message by doing so.

Annie Hall is the story of Alvy Singer (Woody Allen), a neurotic Woody Allen-type that has been married twice before and can’t decide what he wants out of life. He’s consumed by dread about death and the purpose of life, and he can’t relax among the parts of life that bring his friends so much comfort. He famously sneezes into cocaine when it’s offered him. He just wants to stay in New York and fret and try to date until something sticks.

A criticism of Woody Allen that I think has a lot of credence is that the women in his movies can appear to lack depth. In Annie Hall, for instance, he’s married twice before he meets Annie, and neither woman really gets a ton to do. He dismisses them — one for just about nothing and another for a shared sexual problem — and that can read as misogynistic. I’ve always chosen to read it as realistic, because people aren’t very good to each other very often, and I’d argue that Allen’s Alvy Singer isn’t meant to be a positive force in the world. He’s a representation of Allen’s self, and mostly the parts of his self that he’s not all that happy about. It’s a similar problem to my generation’s reading of High Fidelity, where apparently people missed that Rob is supposed to be a pretty messed up guy, not a role model.

While a generation of men certainly views Woody Allen movies as templates for how to behave, that’s not a slam on the film. Just as you have to view Pulp Fiction without picturing the viewpoints of the 700,000 people with posters on their dorms, you have to look at Annie Hall as a piece of art. Annie Hall (Diane Keaton) has plenty to say about Alvy’s neuroses, his views on sex and death, and his ultimate treatment of women. She has agency in my viewing, and oodles of it. Her life is about her, and she’s capable of standing up to the stand-in for so many supposedly gentle, “good guys” and telling them to hit the damn bricks.

Annie Hall isn’t perfect, and subsequent viewings offer different ways to view their romance. It’s iconic because of things like Keaton’s look and Allen’s writing style, and those two things still shine through as superb. Watching Diane Keaton “la-di-da” on a New York street is always going to be a wonderful moment, even if Woody Allen’s legacy is more in question now than ever before.

The Best Part: It’s genuinely funny. People talk up the one-liners, but for me it’ll always be the lobster scene. I’ve never seen anything in a movie that’s closer to the actual high points of a relationship. Allen and Keaton make jokes as they try to live-boil some lobsters, and lines like Allen’s “Maybe if I put a little dish of butter sauce here with a nutcracker, it will run out the other side!” will stick with me forever. The real best part, though, is when they call the scene back in a future relationship where Allen can’t make the same spark happen.

The Worst Part: It’s a little preachy at times, even if you buy into Woody Allen’s style. His rants are supposed to help make the character unlikable, so they’ve always worked for me, but your mileage may certainly vary.

Is It Better or Worse than Crash? Annie Hall is one of my favorite movies of all time, so that should answer the question. Also, this is #86. We’ve now looked back at every single Best Picture Oscar winner to date and now I can firmly make a judgment about Crash as compared to every single other winner. Every single one is better than Crash in some way. Many of them are less interesting, but none are as purely frustrating or consumed by bad choices. The characters in Crash are abhorrent, even the “good guys,” and the message offers no hope for a better world or suggestion of how to get there. There is nothing to be gained from a viewing (or three viewings, apparently) of Crash. There’s something to be gained from every other movie on this list, even if I don’t recommend them all. Movies like Around the World in 80 Days, Cimarron, and The Greatest Show on Earth are uneven, boring, and overly long, but they all are worth discussion in some way. I do not believe there to be any good reason to watch Crash, and while that may change in decades to come as, with all movies, it is rethought, for now, it’s certainly the worst Best Picture winner of all time. I should know, because I absolutely checked.

Worst Best Picture Archives: Crash | Terms of Endearment | Forrest Gump | All About Eve | The Apartment | No Country for Old Men | Gentleman’s Agreement | 12 Years a Slave | The Last Emperor | The Silence of the Lambs | The Artist | A Man for All Seasons | Platoon | The Lord of the Rings: The Return of the King | The King’s Speech | Rain Man | The Departed | The Bridge on the River Kwai | Marty | Gigi | It Happened One Night | Driving Miss Daisy | Shakespeare in Love | Wings | Midnight Cowboy | Rocky | Gone with the Wind | Chicago | Gladiator | Cavalcade | The Greatest Show on Earth | You Can’t Take It With You | The Best Years of Our Lives | The Godfather | Casablanca | Grand Hotel | Kramer vs. Kramer | The French Connection | In the Heat of the Night | An American in Paris | Patton | Mrs. Miniver | Amadeus | Crash, Revisited | How Green Was My Valley | American Beauty | West Side Story | The Sting | Tom Jones | Dances with Wolves | Going My Way | The Hurt Locker | The Life of Emile Zola | Slumdog Millionaire | The Deer Hunter | Around the World in 80 Days  | Chariots of Fire | Mutiny on the Bounty | Argo | From Here to Eternity | Ordinary People | The Lost Weekend | All the King’s Men | Rebecca | A Beautiful Mind | Titanic | The Broadway Melody | The Sound of Music | On the Waterfront | Unforgiven | Million Dollar Baby | My Fair Lady | Hamlet | Braveheart | Oliver! | The English Patient | Lawrence of Arabia | Cimarron | One Flew Over the Cuckoo’s Nest | All Quiet on the Western Front | The Great Ziegfeld | Out of Africa | Schindler’s List | Gandhi | Ben-Hur | The Godfather Part II | Annie Hall