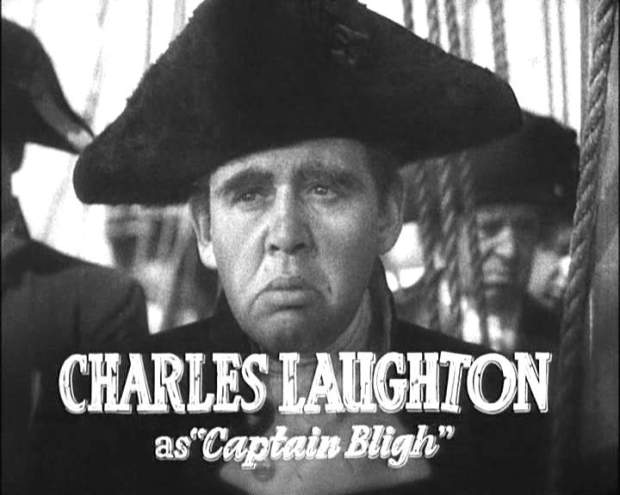 In “Worst Best Picture” we search every single Best Picture Oscar winner of all time from 1927 to present to uncover the worst of them all. Conventional wisdom says that 2005’s winner Crash is the worst winner in history. We won’t stop until we’ve tested every last one. Read the the first, our review of Crash, here. Posts will be relatively spoiler free, but there may be some details revealed. Today’s installment is the 1935 winner Mutiny on the Bounty. Is it better than Crash?

When people make lists of the great performances in great films, they inevitably miss some. I’m not going to pretend my list would  have included someone in Mutiny on the Bounty when I started this, but it most certainly does now. Charles Laughton’s performance as the insane, duty-driven, bloodthirsty Captain Bligh is really something you need to see.

Mutiny on the Bounty is a retelling of a retelling of an actual event, and with that many steps removed historical accuracy no longer matters. It’s not about the actual Captain Bligh or the actual mutiny, and none of that matters. The performances matter. Charles Laughton clearly decided to play Captain Bligh as furious as absolutely possible without going over into comedy. The movie opens with Bligh’s men drafting everyone they can find into service on a two-year journey across the Pacific. The idea of that is difficult enough to imagine — someone interrupts you at dinner and demands you go across the ocean for a significant percentage of your life, no, thanks, I’m good — but doing it with Captain Bligh is the kicker.

Almost immediately and for almost nothing, Bligh demands that a man be killed by being thrown overboard while still tied to the boat. There’s the “tone” of this movie. Captain Bligh wants you dead, period. It’s not even clear that he cares about the mission or a sense of duty, he’s just a madman. Sometimes that kind of villain loses effectiveness because it feels unrealistic, but Bligh feels all-too real. He’s not a force of nature, he’s just a representation of what unlimited power can do to a man, especially when no one has anywhere to go to get away.

His opposition comes mostly in the form of starved, crazed men who gain the strength to resist under Clark Gable’s Fletcher Christian. Christian starts as Bligh’s right-hand man, but his conscience slowly chips at him until he has no chance but to lead a rebellion. Gable sells the “good guy just doing what’s right” role, but he’s less complicated and less interesting than the villain. There a dozen outstanding Clark Gable roles, but this one is merely a mirror to Laughton.

The whole thing meanders a bit whenever the story leaves the boat. It takes too long to get going, it gets lost on some islands, and it definitely slows down during the ending, but it’s worth your time. It’s not perfect, but judged among the other 1930s winners like You Can’t Take It With You, Cavalcade, and Cimarron, it starts to feel very special. It works in a modern setting, though it would need some tightening to work now.

The Best Part: It’s not spoiling anything to say there’s a mutiny, but the mutiny itself has nothing on Bligh’s response. He’s forced to sail away in a tiny boat with a skeleton crew, and the scenes of his angry, steely resistance steal the show. Laughton, Gable, and the third lead were all nominated for Best Actor, but all three lost that year to the lead from The Informer.

The Worst Part: There’s an extended part of the second act that takes place on Tahiti that is largely forgettable. Clark Gable makes all the beautiful island women fall in love with him and a bunch of mildly silly, mildly sexy stuff happens. It doesn’t feel necessary, and since Bligh’s pure insanity is enough of a motivating factor to force the plot, it feels tacked on to add a love story. Even so, it doesn’t add much of one.

Is It Better or Worse than Crash? It’s a much better movie. It’s exciting and interesting and does things that movies are still relatively afraid to do with main characters. Some of the ending is extremely stupid, and a lot of the “message” (such as it is) is pretty worthless. It’s just a movie about two men locked in a power struggle, and one is clearly in the wrong. It’s truth-to-power, which is difficult, and it’s done so with a regard for the difficulty that these men clearly faced. When the chain of command isn’t right, what do you do? How do you put your life at risk when it may not even matter? These are hard questions, and Crash’s “why is everyone so awful all the time” isn’t.

Worst Best Picture Archives: Crash | Terms of Endearment | Forrest Gump | All About Eve | The Apartment | No Country for Old Men | Gentleman’s Agreement | 12 Years a Slave | The Last Emperor | The Silence of the Lambs | The Artist | A Man for All Seasons | Platoon | The Lord of the Rings: The Return of the King | The King’s Speech | Rain Man | The Departed | The Bridge on the River Kwai | Marty | Gigi | It Happened One Night | Driving Miss Daisy | Shakespeare in Love | Wings | Midnight Cowboy | Rocky | Gone with the Wind | Chicago | Gladiator | Cavalcade | The Greatest Show on Earth | You Can’t Take It With You | The Best Years of Our Lives | The Godfather | Casablanca | Grand Hotel | Kramer vs. Kramer | The French Connection | In the Heat of the Night | An American in Paris | Patton | Mrs. Miniver | Amadeus | Crash, Revisited | How Green Was My Valley | American Beauty | West Side Story | The Sting | Tom Jones | Dances with Wolves | Going My Way | The Hurt Locker | The Life of Emile Zola | Slumdog Millionaire | The Deer Hunter | Around the World in 80 Days  | Chariots of Fire | Mutiny on the Bounty