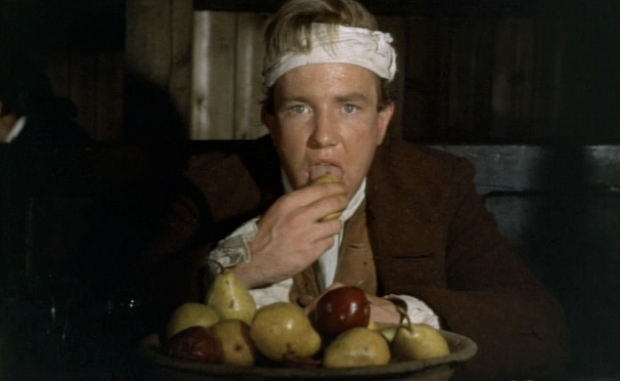 In “Worst Best Picture” we search every single Best Picture Oscar winner of all time from 1927 to present to uncover the worst of them all. Conventional wisdom says that 2005’s winner Crash is the worst winner in history. We won’t stop until we’ve tested every last one. Read the the first, our review of Crash, here. Posts will be relatively spoiler free, but there may be some details revealed. Today’s installment is the 1963 winner Tom Jones. Is it better than Crash?

It’s possible that Tom Jones is the strangest movie to win Best Picture, and that’s really saying something.

The story is pretty classic: a bastard son of two servants wants to marry a noblewoman but she has been promised against her will to a man of deserving status but undeserving character. Variants on that abound, and if that’s all this was it would be unremarkable. It’s partially remarkable because Tom Jones is about finding the comedy in a classic setup, but it’s mostly remarkable because it’s bonkers.

I watched Duck Soup, the Marx Brothers movie, a few years ago for the first time. It’s amazing how comedy evolves over nearly a century, both in what is still funny and what no longer is. Comedy isn’t timeless, not even good comedy. I’ve talked here before about how some references even in classic films don’t make sense in a modern content even when you can identify that they were intended to be biting commentary at the time. For all of Duck Soup that doesn’t work now, the beats are there to help you understand that that’s where the joke goes.

Watching Tom Jones feels like watching the strangest parts of Monty Python’s Life of Brian. Tom Jones the character is sleazy and suave (to a point) and sleeps with four or five different women over the course of his hero’s journey. He is cast out of his castle by the evil man who intends to wed his beloved, sure, that’s a bummer for Tom, but he doesn’t seem all that broken up as he sleeps with women and narrates it into the camera.

If there’s another Best Picture winner that breaks the fourth wall this often, I can’t remember it right now. Once or twice is an interesting wink, but Tom narrates a lot of his journey, to the degree that it starts to feel like a “man, I’m awesome” speech towards the end. It’s supposed to be over-the-top, but it’s something else entirely.

Your enjoyment of Tom Jones will depend on your ability to forget that you’re watching something on a list with Casablanca. It’s a funny movie, at times, but it’s what a better publication would call “ribald” or “raunchy.” The joke consistently is that Tom Jones is in love, but he’ll just sleep with this woman in this patch of tall grass anyway. Comedy is in doing something so many times that it’s funny, then not funny, then hilarious, but I was pretty damn tired of Tom Jones the guy and Tom Jones the movie by the end of it.

The Best Part: The best part of Tom Jones is the strangeness. They break the fourth wall, there are huge action sequences that just die out into nothingness, characters run off screen without warning, people are motivated by nothing, it’s full-on madness like nothing else on the list. There’s a certain absurd joy to picturing the Oscars in 1963 and all those people in expensive clothes clapping for something that is often a slapstick comedy.

The Worst Part: Some of these movies are hard to find now, and a lot of them have variants of themselves that are either longer or shorter than the original release. Because of all that nonsense I take great care to be sure I’m watching the right version. In this case, I thought I might have the wrong movie entirely. The first 25 minutes of Tom Jones — before you understand that you’re watching a take-no-shit nonsense comedy — is frustrating and irritating. Go in expecting madness and you’ll avoid that.

Is It Better or Worse than Crash? What will the iconic scene from Crash be? I’ve been trying to pinpoint the legacy of Crash and I can’t seem to do it. I think it will be the ending, but that’s certainly not the case for Tom Jones.Tom Jones isn’t a part of any canon of great comedies. If it has a legacy, it’s that they spent an absurd amount of money on special effects for a strange British comedy. Beyond that, it’s just one quintessential scene. Tom meets a woman he intends to bed, and they have a hypersexualized meal. Food has been sexualized before, but never like this. Watch three minutes of over-the-top-ness here and get a sense of what Tom Jones is all about:

Worst Best Picture Archives: Crash | Terms of Endearment | Forrest Gump | All About Eve | The Apartment | No Country for Old Men | Gentleman’s Agreement | 12 Years a Slave | The Last Emperor | The Silence of the Lambs | The Artist | A Man for All Seasons | Platoon | The Lord of the Rings: The Return of the King | The King’s Speech | Rain Man | The Departed | The Bridge on the River Kwai | Marty | Gigi | It Happened One Night | Driving Miss Daisy | Shakespeare in Love | Wings | Midnight Cowboy | Rocky | Gone with the Wind| Chicago | Gladiator | Cavalcade | The Greatest Show on Earth | You Can’t Take It With You | The Best Years of Our Lives | The Godfather | Casablanca | Grand Hotel | Kramer vs. Kramer | The French Connection | In the Heat of the Night | An American in Paris | Patton | Mrs. Miniver | Amadeus | Crash, Revisited | How Green Was My Valley | American Beauty | West Side Story | The Sting | Tom Jones