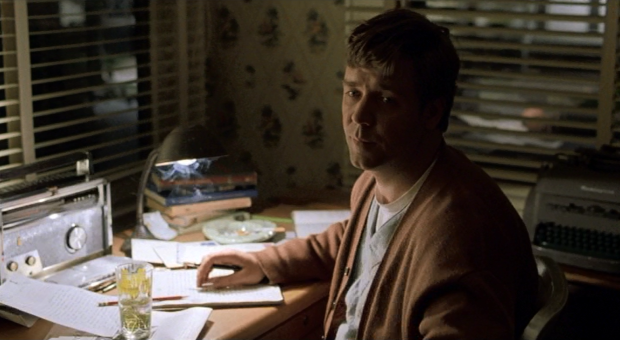 In “Worst Best Picture” we search every single Best Picture Oscar winner of all time from 1927 to present to uncover the worst of them all. Conventional wisdom says that 2005’s winner Crash is the worst winner in history. We won’t stop until we’ve tested every last one. Read the the first, our review of Crash, here. Posts will be relatively spoiler free, but there may be some details revealed. Today’s installment is the 2001 winner A Beautiful Mind. Is it better than Crash?

I didn’t see A Beautiful Mind when it first came out in 2001, and I somehow also missed every single thing about it. My understanding was basically “brilliant math professor is also a strange guy” which is pretty clearly reductive, but it’s also astounding to me that I was OK leaving it at that. I just had no interest in finding out if this one had anything for me.

It’s the highly fictionalized “true” story of John Nash (Russell Crowe), the “brilliant math professor” (close, OK?) who is, for sure, “a strange guy.” I wasn’t that far off. Nash believes himself to be a code specialist who is working undercover to break Soviet codes, but in actuality he’s a paranoid schizophrenic who has created an important life for himself. I hate to tip that right at the top, because the reveal of “none of this is real” is one of the better parts of the movie, but you can’t really talk about A Beautiful Mind without it.

Nash creates three figures in his life: a literature student roommate named Charles Herman during his time at Princeton, a young girl named Marcee, and his contact in the military named William Parcher. All of them are played extremely real, and we don’t find out that they don’t exist until Nash’s wife Alicia (Jennifer Connelly, who won Best Supporting Actress for the role) has to visit him in the hospital. It’s not supposed to be a mystery or anything, but it does shift the movie from the espionage thriller that Nash thinks his life is to the much sadder reality of a mental illness drama.

A movie like Rain Man couldn’t show you the other perspective, but seeing the world through Nash’s eyes really helps. It’s much easier to understand him as a tragic figure when we can see how real the hallucinations seem to him. He develops coping mechanisms and slowly begins to accept that these three people have never existed, but the sadness of not just losing a lifelong friend, but finding out he never existed… that’s real sadness. That loss is powerful, but it’s also skillfully diluted with the reveal that Nash was never a codebreaker. He has to accept that, despite a superior intellect, he’s living an ordinary, not-all-that-exciting life.

The real John Nash is different than Russell Crowe’s John Nash, and most of the criticism of the film centers around inaccuracy. I’m not all that bothered by it in this case, but that’s probably because I don’t know all that much about the real John Nash. It’s not like they messed up something I already have a working knowledge of, so it’s hard for me to judge. As a film, it’s an interesting, sad look at one part of the world of mental illness. It shows how delusions, even ones you can’t help but have, can ruin your life and the lives of the people you love. It’s heartbreaking, and if that’s what you want, it’s one of the better ways to get there.

The Best Part: Poor Jennifer Connelly! One of the great strengths of A Beautiful Mind is the ability to constantly remind you that both Nash and his wife are in their own prisons. Nash can’t fight his delusions without medicine but he can’t “be a genius” with them. Connelly can’t live a safe, happy life with her husband and her child without her husband taking his medicine. It’s a debate that comes up a lot with regard to medication and mental health, and it’s covered pretty well in A Beautiful Mind.

The Worst Part: A lot of the “John Nash is a genius” scenes are really damn pretentious. Towards the end he goes back to Princeton to haunt the library and be around smart people, and a scene between him and a young student drives right up to the cliff before stopping. It’s not quite terrible, but man, it’s rough.

Is It Better or Worse than Crash? This will never be one of my favorite movies, but it’s a well-told story and a surprisingly nuanced piece of art. There are good discussions to be had about the “stand by your man” problem of Connelly’s character and the selfishness of Crowe’s, and I just don’t think there’s anything like that worth discussing in Crash. I walked away from A Beautiful Mind hating John Nash (or at least this John Nash) but I understood him, to some degree. Most of the characters I hated after watching Crash I hated because they behaved nonsensically. A Beautiful Mind has a lot of problems, and I wouldn’t blame you if the problems were too much for you, but Crash is irredeemable. Neither should be your favorite on the list, but Crash is absolutely worse.

Worst Best Picture Archives: Crash | Terms of Endearment | Forrest Gump | All About Eve | The Apartment | No Country for Old Men | Gentleman’s Agreement | 12 Years a Slave | The Last Emperor | The Silence of the Lambs | The Artist | A Man for All Seasons | Platoon | The Lord of the Rings: The Return of the King | The King’s Speech | Rain Man | The Departed | The Bridge on the River Kwai | Marty | Gigi | It Happened One Night | Driving Miss Daisy | Shakespeare in Love | Wings | Midnight Cowboy | Rocky | Gone with the Wind | Chicago | Gladiator | Cavalcade | The Greatest Show on Earth | You Can’t Take It With You | The Best Years of Our Lives | The Godfather | Casablanca | Grand Hotel | Kramer vs. Kramer | The French Connection | In the Heat of the Night | An American in Paris | Patton | Mrs. Miniver | Amadeus | Crash, Revisited | How Green Was My Valley | American Beauty | West Side Story | The Sting | Tom Jones | Dances with Wolves | Going My Way | The Hurt Locker | The Life of Emile Zola | Slumdog Millionaire | The Deer Hunter | Around the World in 80 Days  | Chariots of Fire | Mutiny on the Bounty | Argo | From Here to Eternity | Ordinary People | The Lost Weekend | All the King’s Men | Rebecca | A Beautiful Mind