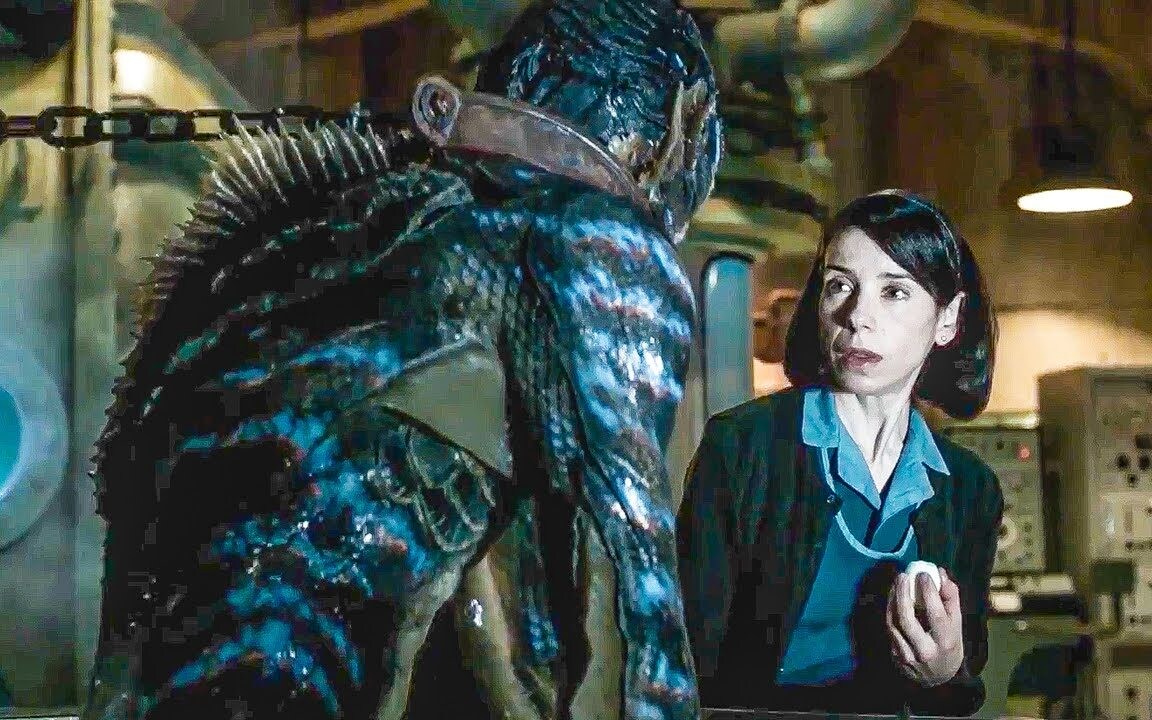 In “Worst Best Picture” we search every single Best Picture Oscar winner of all time from 1927 to present to uncover the worst of them all. Conventional wisdom says that 2005’s winner Crash is the worst winner in history. We won’t stop until we’ve tested every last one. Read the the first, our review of Crash, here. Posts will be relatively spoiler free, but there may be some details revealed. Today’s installment is the 2017 winner The Shape of Water. Is it better than Crash?

Last year nine movies were nominated for an Oscar for Best Picture, but it felt like it had to be either La La Land or Moonlight. The debate raged between a risky, but better, choice about characters we don’t usually see and a musical about the people who vote vote for the winner. Looking back, it’s shocking that the better choice prevailed.

This year’s race felt more wide open. With the notable exceptions of the dreadfully boring Darkest Hour and the Spielberg-at-his-most-Spielberg The Post, anything had a real shot. You could even make a case for the way, way out-there Phantom Thread, which feels more like the quiet winners of the 1980s.

The Shape of Water will probably be remembered as a weird choice, but was it? As people wrote thinkpiece after thinkpiece about the potential shock of a Get Out victory or the similarities of frontrunner Three Billboards Outside Ebbing, Missouri to all-time bad Best Picture choice Crash (which we’ll get back to later), it should have become obvious. Nobody didn’t like The Shape of Water.

Forgive me that sentence construction, because I think it’s the best way to put it. Lady Bird was my favorite movie of the year, but it certainly isn’t a movie for everyone. Somehow, the movie where the woman falls in love with the fish is the movie for everyone. It’s a love story unburdened by the societal complexities of Call Me By Your Name (mostly because no one can talk) and a science fiction movie that doesn’t challenge the audience to face their internal racism like Get Out. Director Guillermo del Toro says he set the film in the Cold War to let audiences think about the story without thinking about how they’d feel about it being real, today. It’s an interesting technique, and it allows for the movie to be political without feeling divisive.

Sally Hawkins plays Elisa, a mute cleaning woman who is charming in a universally positive way. She’s not exactly “quirky,” so the audience loves her from her charming dance on the way to work through her entire (very, very intimate) daily routine. We like her. We might also like Tom Hanks in The Post, but that’s because we like Tom Hanks. In this case, we like Elisa.

Elisa’s friends are underappreciated, overworked, and similarly easy to like. Her world is fine, but not what she wants, until she meets a kindred spirit in a mysterious, magical fish creature who is secured to a tank in a scientific complex.

It’s important to step back here. I wouldn’t call The Shape of Water accessible, considering it includes a detailed, specific description of how the main character has sex with the fish creature, but it’s absolutely likable. I think that, combined with the risk del Toro took to ask the audience to see this in the first place, is the secret to this Oscar victory. It’s going to be too weird for most people, but if you see it, you’ll like it. That’s what the Academy should be rewarding in the first place, even if there were ways to accomplish the same task I’d rather have seen them go for this year.

It’s a love story and a heist movie disguised as something much stranger. Almost everything I’ve read about it emphasizes the weird factor, but I maintain that this is a traditional story and that’s why we like it. So many movies are interested in going deeper on character motivations or challenging us to love bad people, but del Toro wants us to want the lead character to be happy and fall in love. The way he draws us along that normally straight line is what makes The Shape of Water “weird,” but the destination still feels familiar.

The Best Part: Michael Shannon is the difference for me between this being good and great. His character is one-note, but he’s so dedicated to the crazed, right-wing, high-and-tight mentality of the era that he gives a generic villain some depth. Best Supporting Actor was a tough race this year and Richard Jenkins earned his nomination here, but it will be some time before I forget Michael Shannon’s performance.

The Worst Part: I hate the ending. No one else hates the ending, but I’m fine with that. I have to expect that distance will endear me to the ambiguity, but not yet.

Is It Better or Worse than Crash? It’s better. It’s not the best choice this year, but it’s a beautiful story and it’s risky enough to deserve to be on a list of 90 cinematic accomplishments. While we’re talking about this, Three Billboards Outside Ebbing, Missouri has taken a lot of flack lately and has drawn a ton of comparisons to Crash. I enjoyed Three Billboards and you can read 89 other versions of this to see if I liked Crash, so I’m biased, but I think these comparisons are bizarre. I wish it had won to give me more space to discuss it, but Three Billboards is every bit as rough around the edges, but it spends so much more time punishing its racists. The main hot take seems to be that the racist cop in Three Billboards gets redeemed (like in Crash), but Three Billboards walks him through a journey to learn anything, even a slight, not-nearly-enough thing, and Crash ends with a single, unrelated event that cures a character completely. Nothing up for the award this year was worse than Crash, but we’ll certainly keep looking.

Worst Best Picture Archives: Crash | Terms of Endearment | Forrest Gump | All About Eve | The Apartment | No Country for Old Men | Gentleman’s Agreement | 12 Years a Slave | The Last Emperor | The Silence of the Lambs | The Artist | A Man for All Seasons | Platoon | The Lord of the Rings: The Return of the King | The King’s Speech | Rain Man | The Departed | The Bridge on the River Kwai | Marty | Gigi | It Happened One Night | Driving Miss Daisy | Shakespeare in Love | Wings | Midnight Cowboy | Rocky | Gone with the Wind | Chicago | Gladiator | Cavalcade | The Greatest Show on Earth | You Can’t Take It With You | The Best Years of Our Lives | The Godfather| Casablanca | Grand Hotel | Kramer vs. Kramer | The French Connection | In the Heat of the Night| An American in Paris | Patton | Mrs. Miniver | Amadeus | Crash, Revisited | How Green Was My Valley | American Beauty | West Side Story | The Sting | Tom Jones | Dances with Wolves | Going My Way | The Hurt Locker | The Life of Emile Zola | Slumdog Millionaire | The Deer Hunter | Around the World in 80 Days  | Chariots of Fire | Mutiny on the Bounty | Argo | From Here to Eternity | Ordinary People | The Lost Weekend | All the King’s Men | Rebecca | A Beautiful Mind | Titanic | The Broadway Melody | The Sound of Music | On the Waterfront | Unforgiven | Million Dollar Baby | My Fair Lady | Hamlet | Braveheart | Oliver! | The English Patient | Lawrence of Arabia | Cimarron | One Flew Over the Cuckoo’s Nest | All Quiet on the Western Front | The Great Ziegfeld | Out of Africa | Schindler’s List | Gandhi | Ben-Hur | The Godfather Part II | Annie Hall | Birdman or (The Unexpected Virtue of Ignorance) | Spotlight | Moonlight | The Shape of Water