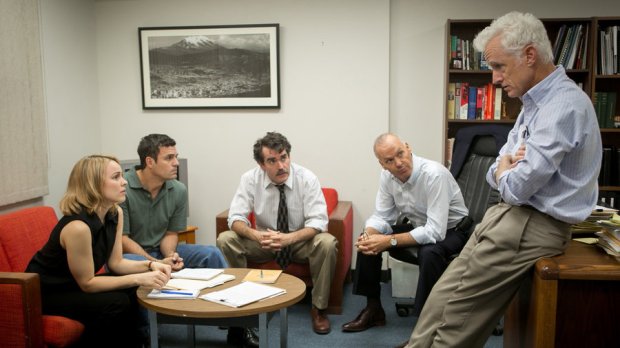 In “Worst Best Picture” we search every single Best Picture Oscar winner of all time from 1927 to present to uncover the worst of them all. Conventional wisdom says that 2005’s winner Crash is the worst winner in history. We won’t stop until we’ve tested every last one. Read the the first, our review of Crash, here. Posts will be relatively spoiler free, but there may be some details revealed. Today’s installment is the 2015 winner Spotlight. Is it better than Crash?

Doing this feature yearly now has changed the way I think about Best Picture winners. I watched the first 86 over the course of a year and tried to consider the necessary context of each film’s release before judging it. Wings, the first winner, is a silent film that feels intolerably long at times and fascinatingly specific at others. Judged against modern film with no perspective, it doesn’t fare very well. It’s only with the context of the day that you begin to understand why the pathos of some scenes worked for those audiences.

This is the second year that I’ve not only watched the movie as it came out, but I also saw the Oscars themselves and all of the other nominees when they were new. That removes the struggle of context because the context is “right now.” We all know this world and we don’t have to use any caveats when describing a movie’s merits or failures now. They just are what they are.

Last year I wrote about how history would judge Birdman (still not using that whole title) and it’s honestly tough to say. Alejandro Iñárritu won his second consecutive Best Director award for The Revenant and seems to have solidified “divisive” as a term that needs to be used when talking about him. Personally, I still think Birdman is outstanding but I think The Revenant was the worst movie up for Best Picture or Best Director this year. I think I know how people felt last year now. Sorry y’all had to go through that, now that I’m in your camp.

Mumbling, screaming, bear-fighting movie aside, this was a strong year for Best Picture nominees. You have your necessary “slight” movies about good people doing (mostly) good things in Bridge of Spies and Brooklyn, you have your surprise nominations for movies for people who don’t necessarily watch the Oscars in Mad Max: Fury Road and The Martian, and you have your capital-I Important movies in Room, The Big Short, and Spotlight. There really aren’t a lot of bad choices there. History will correctly remember these Oscars as the ones mired in exclusionary selections, but at the very least the exclusionary movies they picked were all good ones.

Spotlight seemed inevitable in the weeks leading up to the ceremony. When a movie is nearly universally acclaimed, I always like to go to the reviews that demand that “nearly” adverb. There are 11 negative reviews on Rotten Tomatoes and the common thread seems to be that the acting isn’t up to par. Spotlight wasn’t nominated for either lead acting category and Rachel McAdams and Mark Ruffalo lost in both supporting categories, but the film demands the nebulous “ensemble cast” descriptor. No one performance dominates the film (though if I had to pick one, I’d go with Ruffalo) because it’s about the story they’re all telling. They don’t matter; the truth does. That could be a sentence used to describe a very sanctimonious movie, but in this case I mean it in a positive way.

Spotlight doesn’t need a lot of description. A group of reporters gather accounts of sexual abuse by priests of children in Boston. It’s a true story, so it’s no spoiler to say that they publish the truth and the city (and country, and world) is outraged. We’re still in this. We still know this and we often feel confused or powerless to help in situations like these. There isn’t an easy answer here and the movie isn’t designed to offer one. It’s the first step — the spotlight, get it — in highlighting a problem. That scope works for this narrative and I think that’s why it’s such a success. They set out to tell one specific part of an important, true, huge story and they nailed it.

Let’s close this year on one more discussion of context. I’ve heard a lot of discussion about how recent winners will be remembered, and indeed that was the main detracting argument about Birdman. I don’t know if people in the future will understand Spotlight and our context. It’s strange to watch a movie like Gentleman’s Agreement or The Life of Emile Zola now because they require you to step outside of yourself and your world. Spotlight isn’t timeless, but I don’t know that it needs to be in order to be great. Great film needs to make sense in the now, first, and Spotlight definitely does that.

The Best Part: Mark Ruffalo loses his mind towards the end of the movie because he’s frustrated about the progress of their story. He wants to do more and he wants to find the answer for how you “fix” the whole situation. There isn’t one. Everyone on the Spotlight team serves as an audience surrogate at some point or another in Spotlight, but no one nails the emotions the movie instills as much as he does in that moment. It’s an outstanding choice to contain the “anger” of the team to that moment, as well. They’re always driven, but that’s the only time it all overflows and becomes unproductive anger. How many of us would only be capable of unproductive anger in that real-life job?

The Worst Part: This is tough for Spotlight. While I don’t think it’s a perfect film, I don’t think there’s any one thing I didn’t like or would change. I think Room should have won Best Picture, so I’m tempted to go with “not enough time trapped in a room that inflicts psychological and biological terror.” In all seriousness, if I have to pick something I suppose it doesn’t really complicate the newsroom staff very much. Most of the heroes are solely heroes whose greatest faults include drinking beer after work and not sleeping enough. I don’t even know that making them complex figures would make this a better movie, but it’s something I noticed.

Is It Better or Worse than Crash? The difference here is an ocean. Spotlight is several magnitudes better than Crash. One interesting comparison here is the ensemble cast idea. Both movies lack a true “lead” but they play this different ways. Crash is all about how people enter and leave each other’s lives while Spotlight is about working as a team. Both kinds of ideas can work with an ensemble cast, but you’re only as strong as your weakest player. Spotlight doesn’t have a bad performance. Crash probably has a good one, somewhere, but after 88 of these I’m fairly convinced that it does not have a good anything.

Worst Best Picture Archives: Crash | Terms of Endearment | Forrest Gump | All About Eve | The Apartment | No Country for Old Men | Gentleman’s Agreement | 12 Years a Slave | The Last Emperor | The Silence of the Lambs | The Artist | A Man for All Seasons | Platoon | The Lord of the Rings: The Return of the King | The King’s Speech | Rain Man | The Departed | The Bridge on the River Kwai | Marty | Gigi | It Happened One Night | Driving Miss Daisy | Shakespeare in Love | Wings | Midnight Cowboy | Rocky | Gone with the Wind | Chicago | Gladiator | Cavalcade | The Greatest Show on Earth | You Can’t Take It With You | The Best Years of Our Lives | The Godfather | Casablanca | Grand Hotel | Kramer vs. Kramer | The French Connection | In the Heat of the Night | An American in Paris | Patton | Mrs. Miniver | Amadeus | Crash, Revisited | How Green Was My Valley | American Beauty | West Side Story | The Sting | Tom Jones | Dances with Wolves | Going My Way | The Hurt Locker | The Life of Emile Zola | Slumdog Millionaire | The Deer Hunter | Around the World in 80 Days  | Chariots of Fire | Mutiny on the Bounty | Argo | From Here to Eternity | Ordinary People | The Lost Weekend | All the King’s Men | Rebecca | A Beautiful Mind | Titanic | The Broadway Melody | The Sound of Music | On the Waterfront | Unforgiven | Million Dollar Baby | My Fair Lady | Hamlet | Braveheart | Oliver! | The English Patient | Lawrence of Arabia | Cimarron | One Flew Over the Cuckoo’s Nest | All Quiet on the Western Front | The Great Ziegfeld | Out of Africa | Schindler’s List | Gandhi | Ben-Hur | The Godfather Part II | Annie Hall | Birdman or (The Unexpected Virtue of Ignorance) | Spotlight