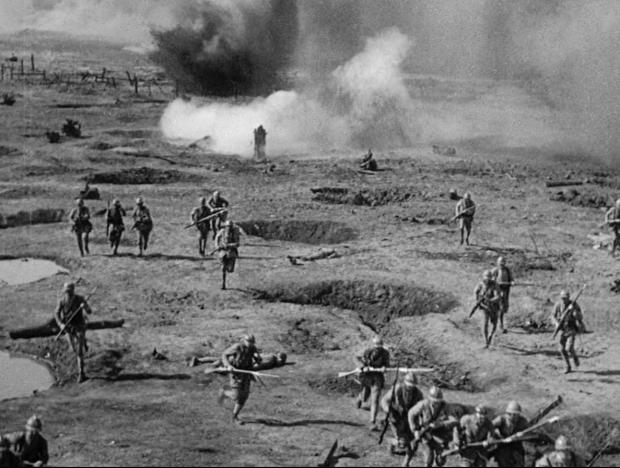 In “Worst Best Picture” we search every single Best Picture Oscar winner of all time from 1927 to present to uncover the worst of them all. Conventional wisdom says that 2005’s winner Crash is the worst winner in history. We won’t stop until we’ve tested every last one. Read the the first, our review of Crash, here. Posts will be relatively spoiler free, but there may be some details revealed. Today’s installment is the 1929-1930 winner All Quiet on the Western Front. Is it better than Crash?

Just about all of the first 15 Best Picture winners are serious, but none of them are serious like this one. All Quiet on the Western Front is the original war movie, and its message is the message of every great war movie that followed it: “war is hell, don’t go to war.”

There are no names you’d know associated with it. No one involved in it has gone down in popular film history. It’s just a lone, strange piece of culture that is notable only because it’s a filmed version of a classic novel and because it’s one of the 86 “best” movies of all time. It holds up that end of the bargain well, its a monumental achievement that’s extremely watchable in 2014. It’s the story of young German boys who enlist for various reasons at the start of World War I. The film opens on their time in school, where a teacher gives a rousing speech about the need to prove oneself and the glory of fighting for country and for honor. They drink the Kool-Aid and they’re off to the front.

Every war movie has to decide what it wants to say, but I can’t think of any other one that is as determined as this one to say exactly one thing. Surely Full Metal Jacket doesn’t paint a positive view of war, but All Quiet on the Western Front is relentless. The boys fall under a brutal superior who tells them they are going to die. They meet older, seasoned soldiers who tell them they are going to die. They go to the front and then a bunch of them immediately die. Every single scene serves only that purpose: to dissolve the myth that war is anything other than the systematic killing of a generation of men by another country’s entire generation of young men.

This really can’t be overstated. A mortar lands in the open space near their trench early on in the movie and the camera holds on the removed hands and arms that are left holding on to barbed wire after the explosion. It’s a grisly shot, but for 1929 it seems unthinkable. It is striking 90 years later, but considering what the audience in 1929 thought of that is something I can’t even do. I suppose it may have been less shocking to some of them, considering that nearly four million Americans had just been to World War I. It’s hard to say.

There are too many war movies on this list. Humanity is obsessed with our most complete way of ending ourselves, and we tend to reward people that make us consider it in new light. All Quiet on the Western Front will mess with you if you watch it now, and I think that’s really all it takes to win an Oscar for a movie like this. It’s worthy of the honor beyond the shock value. There’s not really a lot of gore, most of the shocking scenes are reveals of character deaths off screen or tense moments in trenches and wilderness. None of the characters are particularly memorable, but many scenes stand out. I’ll never remember his name, but the man who loses a foot and asks his friends that “it hurts, what happened to it?” because he doesn’t know, yet, is ice-cold. In another scene, a man who charges a trench ready to kill anyone in it is forced to rethink his brutality when he’s stuck in that trench with the dying man all night. They’re human moments, and while they may come off as heavy handed to some viewers, they really work for me.

The Best Part: It’s the brutality of war, played out on screen. No one can walk away from this movie and say “yep, mow down an entire generation of men and we’ll fix all the problems.” War is complicated, but All Quiet on the Western Front takes a very “this can’t be your answer” approach.

The Worst Part: In one scene, the soldiers gather around to eat during a lull in combat and they discuss the causes of war. It’s the kind of scene that works well in literature, but when you’re forced to actually watch something that philosophical, you have to deal with the fact that people don’t talk like that. No one is sitting at Arby’s with their friend talking about the nature of absolute truth. Through the rest of the movie everyone deals with concepts through specifics, which always works, so the one time someone strikes up a “big conversation” with everyone about the “why” of war, it feels a little out of place.

Is It Better or Worse than Crash? Both movies want you to really think about a stark concept and both of them don’t want you to get distracted by characters. It’s effective in All Quiet on the Western Front, because it keeps the roster general. It doesn’t matter who these people are, because this experience will be true for all people. Crash doesn’t have that crutch, so it ends up giving too-brief back stories for everyone. I suppose a few connections are made that are the higher points of Crash (families love each other, cool, cool) but for the most part, no one is ever elevated to the point that I forget they’re Brendan Fraser or Sandra Bullock.

Worst Best Picture Archives: Crash | Terms of Endearment | Forrest Gump | All About Eve | The Apartment | No Country for Old Men | Gentleman’s Agreement | 12 Years a Slave | The Last Emperor | The Silence of the Lambs | The Artist | A Man for All Seasons | Platoon | The Lord of the Rings: The Return of the King | The King’s Speech | Rain Man | The Departed | The Bridge on the River Kwai | Marty | Gigi | It Happened One Night | Driving Miss Daisy | Shakespeare in Love | Wings | Midnight Cowboy | Rocky | Gone with the Wind | Chicago | Gladiator | Cavalcade | The Greatest Show on Earth | You Can’t Take It With You | The Best Years of Our Lives | The Godfather | Casablanca | Grand Hotel | Kramer vs. Kramer | The French Connection | In the Heat of the Night | An American in Paris | Patton | Mrs. Miniver | Amadeus | Crash, Revisited | How Green Was My Valley | American Beauty | West Side Story | The Sting | Tom Jones | Dances with Wolves | Going My Way | The Hurt Locker | The Life of Emile Zola | Slumdog Millionaire | The Deer Hunter | Around the World in 80 Days  | Chariots of Fire | Mutiny on the Bounty | Argo | From Here to Eternity | Ordinary People | The Lost Weekend | All the King’s Men | Rebecca | A Beautiful Mind | Titanic | The Broadway  Melody | The Sound of Music | On the Waterfront | Unforgiven | Million Dollar Baby | My Fair Lady | Hamlet | Braveheart | Oliver! | The English Patient | Lawrence of Arabia | Cimarron | One Flew Over the Cuckoo’s Nest | All Quiet on the Western Front