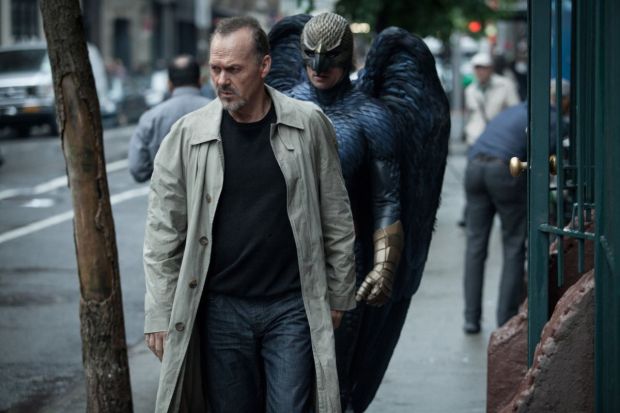 In “Worst Best Picture” we search every single Best Picture Oscar winner of all time from 1927 to present to uncover the worst of them all. Conventional wisdom says that 2005’s winner Crash is the worst winner in history. We won’t stop until we’ve tested every last one. Read the the first, our review of Crash, here. Posts will be relatively spoiler free, but there may be some details revealed. Today’s installment is the 2014 winner Birdman or (The Unexpected Virtue of Ignorance). Is it better than Crash?

People loved or hated Birdman or (The Unexpected Virtue of Ignorance). I’m in the moment, right now, in 2015, and damn people are polarized on this.

For the people that hated it, there are two main things about Birdman (that’s all we’re calling it from here on out, deal with it) people are saying in the immediate aftermath of its win:

10 years gives enough perspective, no doubt. The last five winners from 10 years ago: The Lord of the Rings: Return of the King (still good), Chicago (still good, but eh), A Beautiful Mind (oh, dear), Gladiator (oh no what happened), American Beauty (well…) Those are dated movies at best, even though it’s a rough half-decade for the Academy.

This year is not a down year. Selma, The Imitation Game, Whiplash, The Grand Budapest Hotel, Still Alice, and, yes, Boyhood, are all great movies. Any of them (and I include Still Alice in that list, defiantly, despite not being nominated for Best Picture) would make a suitable Best Picture winner for 2014. The Academy gave it to Birdman, though, so we’re here talking about the story of Riggan Thomson.

Riggan (Michael Keaton) is the former star of the “Birdman” series. It’s a not-at-all-veiled take on Keaton’s time as Batman, and it does make me wonder who else they had in mind if Keaton turned them down. Dean Cain? Anyway, Riggan wants to regain some respect in the world after a series of “popcorn” films, and he chooses to do so by putting on a play that’s based on a Raymond Carver story.

Riggan perceives himself to have superpowers. He levitates and controls things with his mind, but only once in a way anyone else can see. It’s left up to the viewer if this is actually supernatural, but it’s heavily implied that Riggan just thinks that he’s an exceptional person. It’s built into the entire world of Riggan Thomson: he sees himself as magical — or at least special — in a way that mere mortals aren’t. The only power he exerts is that of excellence, it just happens to manifest itself as telekinesis as a means to achieve his desires.

The entire movie is designed to look like one continuous shot, and that combined with the magical powers and the subject of “actor acts in a more serious acting thing” sets Birdman up to be some risky material. It’s not difficult to see why people hated it, and it’s especially interesting that it drew the inspired (but down-to-Earth) Boyhood as a foil. The two movies could not be more different, and it will be fascinating to see people connect the two forever.

What matters in Birdman isn’t the flash, though, it’s the theme: failure. Riggan hates himself and consumes himself in a play that he views as credible to claw back his image from a career he sees as bereft of credibility. The dots are easy to connect, but the situation is complicated by Mike (Edward Norton) who is brought in to replace a less qualified actor. As the co-star (and in the world of Birdman, the more esteemed actor), Mike steals the show. He’s “edgy” and “raw” in a way that the world can’t view their favorite fictional superhero. Mike cares (or is seen to care) about the art itself. He cares to the point of total rebellion and absurdity when he freaks out during the preview because his gin has been replaced with water. Riggan can’t perform his act of “art” in the face of someone he views as actually sincere, and he’s stunted as a result.

That leads to the real discussion of Birdman: is this just another movie about movies and people in movies? The Artist (and to a lesser extent, Argo), carry the recent discussion of Best Picture winners that are just Hollywood all proud of itself, and that’s a valid criticism. I don’t agree with it, because I think it’s a much smarter look at how Riggan views himself than how he fears acceptance as an actor. When Birdman the character talks to Birdman the man in a way he can’t ignore, when he actually dares him to look at himself and ask deep down what he will really do to prove to himself that this all matters…

… the moral is yours to decipher. If you see this as a bad lesson and the sad events of a sad man, well, I can’t say I think that interpretation is wrong. For me, Birdman or (The Unexpected Virtue of Ignorance) — terrible, awful title and all — is the story of coming to terms with oneself. Most of us don’t do it as dramatically as Keaton does, but most of us weren’t Batman.

The Best Part: Emma Stone, who elevates what could be a stereotypical performance into something that would be a strong contender for Best Supporting Actress any other year. Not here, though, because Patricia Arquette was awesome.

The Worst Part: Probably Edward Norton, who plays “awful” a little too successfully. The play-within-a-film and the “love is absolute” stuff, plus the fight… if anything ages poorly, it’ll be his over-the-top performance.

Is It Better or Worse than Crash? From here on out, this will be a yearly installment, as I hope to update this right after each Oscars. Is it important to keep up this museum? I say it is because now we have the rare chance to talk about movies without any lapse. This is what it is now. Will people hate this in 10 years? They might, but in 2015 it seems to be a 50/50 split between people that liked Boyhood‘s honesty and people that liked the lies of Birdman. They’re different movies, and like many of the other movies on the list, it’s not an easy call which should win. Birdman or Boyhood would easily trounce Crash, and I almost wish they’d made this difficult with American Sniper.

Worst Best Picture Archives: Crash | Terms of Endearment | Forrest Gump | All About Eve | The Apartment | No Country for Old Men | Gentleman’s Agreement | 12 Years a Slave | The Last Emperor | The Silence of the Lambs | The Artist | A Man for All Seasons | Platoon | The Lord of the Rings: The Return of the King | The King’s Speech | Rain Man | The Departed | The Bridge on the River Kwai | Marty | Gigi | It Happened One Night | Driving Miss Daisy | Shakespeare in Love | Wings | Midnight Cowboy | Rocky | Gone with the Wind | Chicago | Gladiator | Cavalcade | The Greatest Show on Earth | You Can’t Take It With You | The Best Years of Our Lives | The Godfather | Casablanca | Grand Hotel | Kramer vs. Kramer | The French Connection | In the Heat of the Night | An American in Paris | Patton | Mrs. Miniver | Amadeus | Crash, Revisited | How Green Was My Valley | American Beauty | West Side Story | The Sting | Tom Jones | Dances with Wolves | Going My Way | The Hurt Locker | The Life of Emile Zola | Slumdog Millionaire | The Deer Hunter | Around the World in 80 Days  | Chariots of Fire | Mutiny on the Bounty | Argo | From Here to Eternity | Ordinary People | The Lost Weekend | All the King’s Men | Rebecca | A Beautiful Mind | Titanic | The Broadway Melody | The Sound of Music | On the Waterfront | Unforgiven | Million Dollar Baby | My Fair Lady | Hamlet | Braveheart | Oliver! | The English Patient | Lawrence of Arabia | Cimarron | One Flew Over the Cuckoo’s Nest | All Quiet on the Western Front | The Great Ziegfeld | Out of Africa | Schindler’s List | Gandhi | Ben-Hur | The Godfather Part II | Annie Hall | Birdman or (The Unexpected Virtue of Ignorance)